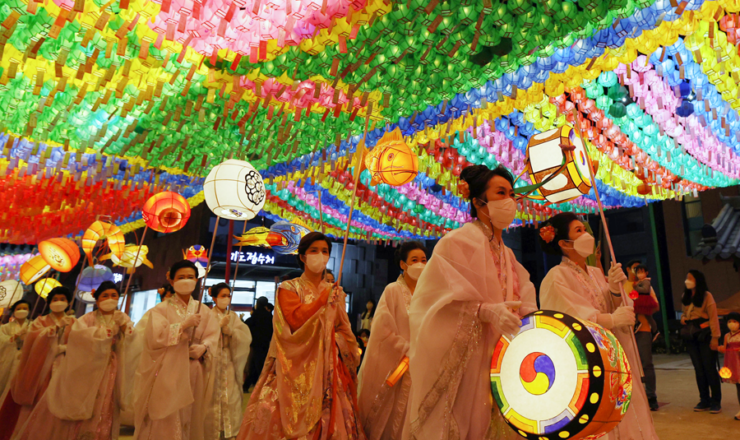 On April 15, the Ministry of Health and Welfare in Korea announced that all measures of social distancing will be lifted from April 18, after about two years and one month. From this day on, many fields are expected to normalize as pre-COVID-19, and festivals and events are also in the mood to be revived.

Yeondeunghoe, the Lotus Lantern Festival in Korea was originally held every year before Buddha’s Birthday (April 8th in the lunar calendar), but due to COIVID-19, it could not be held normally in 2020 and 2021. Coincidentally, Yeondeunghoe was registered as an Intangible Cultural Heritage of Humanity by UNESCO in 2020 when the COVID-19 outbreak was rampant. The Yeondeunghoe Preservation Committee, which organizes the event, declared that the event will be held normally this year. Based on Jogyesa Temple in Seoul, the event began on April 5 this year and will run until Buddha’s birthday (May 8 this year).

According to the Standard Korean Dictionary, “Yeondeunghoe originated in Silla as a ritual to light a light and pray for good fortune on the birthday of Buddha, and was held on the fifteenth day of the first lunar month during the reign of King Taejo of Goryeo. In the first year of King Hyeonjong’s reign (1010), it was changed to the 15th day of February.” The festival continues from the period of the northern and southern kingdoms through the Goryeo period, the Joseon period, and the Japanese colonial period to the present day. Since Buddhism was introduced to Korea, the festival has been an important cultural event for both the royal court and the common people. Historically, Yeondeunghoe in Goryeo period, which was held as a national event, had the greatest social function, and it also functioned as an important cultural event and festival for the common people. Even in the Joseon Dynasty, when Confucianism was a national ideology, Yeondeunghoe functioned as an important cultural event and festival for the common people. While the festival of Silla and Goryeo, which were Buddhist countries, had a strong national and religious color, the festival of Joseon, which was a Confucian country, was more a private event than a religious event. Even today, the lantern festival has become an important cultural event for the public and has become a citizen’s festival that non-Buddhists can enjoy. The event is largely composed of a ceremony to bathe the baby Buddha, a procession of lanterns, and a Buddhist ceremony.

The ICH values of the “Yeondeunghoe, Korea Lantern Festival,” which was recognized through UNESCO’s list of intangible cultural heritages in 2020, are as follows.

“Yeondeunghoe is a festival in which all people, regardless of gender or age, participate as equal members of society. In particular, the active participation of women and children stands out in the festival. Although patriarchal culture has long been strongly entrenched in Korean society, Yeondeunghoe serves as an opportunity to uplift women and children in particular. Traditionally, for young people, the festival has been an effective means of expressing their creativity by experimenting with various shapes and colors of lanterns. Yeondeunghoe contributes to social cohesion. Lantern festivals are usually a place to share joy and happiness, but in times of social adversity, they unite society and help people overcome the problems they face. In 2014, when the whole country was shocked and grieved by the tragic Sewol ferry accident, all pre-planned Lotus Lantern events were canceled and the following new topics were announced. “Sharing sorrow and gathering hope.” This shows that Yeondeunghoe is being performed in a close relationship with society’s interest and the sentiments of the times.”

Yeondeunghoe, which has been transmitted to this day, has become a precious event that has shared joys and sorrows with the public for a long time beyond its religious significance. Since 2020, many people are living a difficult daily life that they have never experienced before due to COVID-19. After three years, the streets are back with the lanterns. That is why the meaning of the Yeondeunghoe, which we will meet for the first time after the dark of era of COVID-19, and which has not yet been fully lifted, is even more special. I hope that the Yeondeunghoe, which has revealed the emotions of the times and the value of life, can be a light of comfort and hope to those who have been exhausted from the pandemic over the past three years.