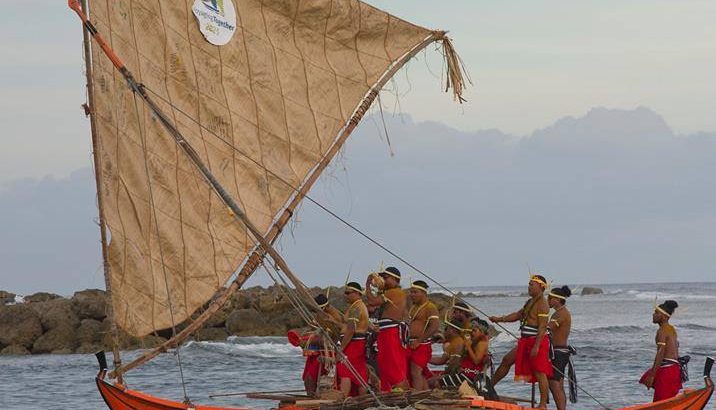 For centuries, the people of the central Caroline Islands have relied heavily on their voyaging canoes as their primary means of transport. They made voyages to islands near and far to obtain food, tools, and other valuables. In some instances, following devastating natural calamities, their canoes are used to relocate to a different island as was the case for the Carolinians who now reside in the Commonwealth of the Northern Marianas (CNMI). Today, the art of canoe building and traditional celestial navigation continues in these remote islands of the Federated States of Micronesia. Although at a smaller scale than what it used to be, the important knowledge of their ancestors is being passed on to younger generations. Waa’gey is a community-based organization working with island communities to transfer traditional skills and knowledge. Realizing the challenges brought to the shores of Micronesia by globalization and environmental issues including climate change and rising sea levels, the people of Lamotrek Atoll in Yap worked with Master Navigator Larry Reigetal and his crew to build an outrigger canoe named The Lucky Star1.. Using only traditional seafaring methods and no modern navigation technology, the eight-man crew led by master Reigetal braved storms and powerful ocean currents to travel over five hundred miles to Guam over five days to showcase the Micronesian culture at the Festival of Pacific Arts in May 2016. After the festival, the crew sailed back to Lamotrek over a period of ten days.

The crew brought along a traditional pandanus sail woven by the people of Lamotrek to use during the festival and to display the skills used to create it. The entire process of weaving the sail took more than six months, with over thirty people contributing to its construction. Due to modern seafaring technologies, the traditional weaving techniques in Lamotrek had not been in practice for over half a century. However, through this project, Waa’gey was able to enlist the help of a 95-year-old Maria Labusheilam, the last master weaver in Lamotrek. She taught the skills to twenty women apprentices, led by her daughter Maria Ilourutog, granddaughter Pualina Lairegiyalo, and daughter-in-law Esther Letalimepiy. The men of Lamotrek, led by Xavier Yarofaliyango, cut and stretched the leaves and stitched the sail together. Labusheilam died two weeks after passing on the knowledge. She did not see the final outcome of her work. The pandanus sail is woven from the Pandanus odoratissimus (screwpine) commonly grown on beaches of tropical islands. The leaves are harvested, dried under the sun, and stripped into single fibers. They are then woven into longer strips of sheets that are then strengthened by stretching and wrapping the sheets around coconut trees. The sheets are then sewn together with sennit twine ropes made from coconut fibers. Sail weaving is not the same as weaving sleeping mats, as they need to be doubled and overlapped to ensure strength and durability.

The sail was displayed at the University of Guam and the Honolulu museum. It is now in Hawaii and will make its way to New York where it will be the main art display at the UN Headquarters during the Ocean Conference. It will then travel to Europe, Asia, and Australia before making its final voyage to the Federated States of Micronesia in 2018 to sail the MicroGames torch in Yap . It is autographed by all the people from Lamotrek and the president of the FSM, H.E. Peter Christian.