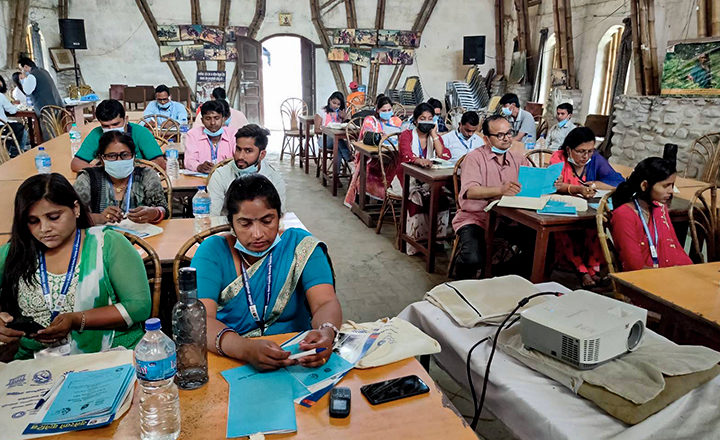 The capacity building workshop, Community Based Capacity Building Training on ICH Convention 2003, was successfully conducted from 9 to 11April 2021 in Janakpur, Dhanusa District of Province 2, Nepal.

The workshop, under the UNESCO’s Participation Programme 2020-2021, was jointly organized by the Chomolungma UNESCO Centre, Kathmandu Peace UNESCO Centre, and Sitapaila UNESCO Centre in association with Nepal National Commission for UNESCO.

The workshop was held to promote the spirit of the 2003 Convention among the local communities and help pave ways to enhance the understanding on intangible cultural heritage. More than twenty-nine participants from eight districts of the province were present in the training. The participants comprised of practitioners, students, journalists, and representatives of the community and governmental and non-governmental sectors. The program was conducted under the framework of the 2003 Convention. It was also designed to make aware the diverse cultural traditions that exist in Nepal and the ways to safeguard and endorse them.

The training was focused on the basic concepts of the 2003 Convention and the role required of the community to safeguard its intangible cultural heritage for future generations. The classes were conducted through power-point lectures, group discussions, interactions, and demonstrations. The participants were divided into five groups where they introduced aspects various intangible cultural heritage present in their communities and the diverse ways of celebrating similar cultures from other communities. The interaction session played an important role on bringing out issues about different cultural values. The session also highlighted FPIC (free prior informed consent) prior to field studies and inventorying process.

The workshop successfully transferred the concept of the 2003 Convention and the role of the community in enhancing and safeguarding their intangible cultural heritage. The participants expressed how the workshop has educated them on the importance of culture. They promised to promote and share the idea of intangible cultural heritage in their communities so that more people may be made aware of the importance of such values and beliefs. They are expecting more such programs in the future where they can enjoy a platform that promotes cultural exchanges and discussions on ways to promote and preserve them.

Similar programs have been scheduled in two more provinces in for May and June 2021. Furthermore, an intensive training on the 2003 Convention will be conducted in July in Kathmandu, Nepal.