Women at the frontline 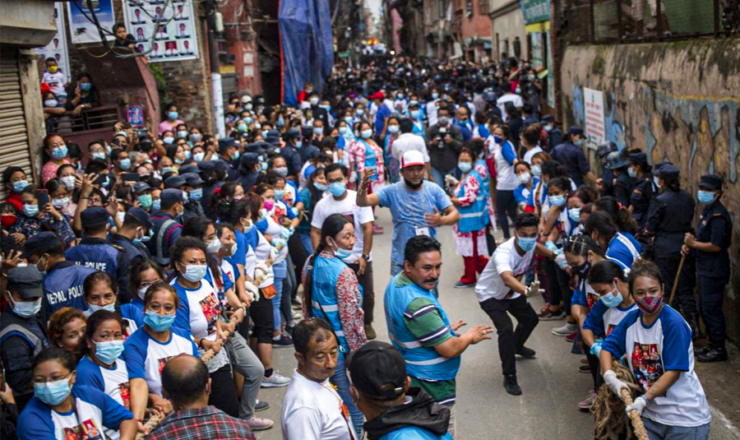 On 24th of September 2021, through the narrow lanes of ancient city of Kathmandu mass of women was seen pulling the chariots of Kumari, Ganesh and Bhairav. This spectacular scene was an unthinkable of a decade back. Women play integral role in the Newa household and many traditional functions but in the public events women always occupy backstage.

Now on the last day of weeklong street festival – Yenyā Punhi also known as Indra Jatra, the new traditions of pulling chariot by women have been started. On this festival along with chariot processions many other activities takes place in those seven days such as several mask dances, raising of wooden logs, procession with lamps around ancient city boundary, display of Bhairav deities in the streets and other smaller events.

The chariot processions of Kumari, Bhairav and Ganesh, represented by children holds a special place, as Goddess Kumari was the tutelary goddess of Malla King of Kathmandu Valley and this practice is still present. In past women never participated in the pulling any of the chariots, this might be due to several reasons such as the chaos while pulling, crowd and social taboo.

Three wooden chariots of Ganesh, Kumari and Bhairav get pulled for three days, which starts from third or fourth day of the Yenyā Punhi festival. First day of chariot procession is done through lower quarters of ancient city, second day through upper quarters and finally on the last day through middle quarter. The last day of the whole festival is known as Nānichāyā.


The new tradition of pulling the chariot by women has been started on day of Nānichāyā since Nepal Sambat 1132 (2011 AD). Mrs. Nanihira Prajapati, coordinator of pulling chariot shares the story of women pulling chariot was an idea implanted by late Mr. Mohan Krishna Dongol. It was his support and idea that the women were able to pull the chariot and which is still continued. Last year the whole festival was halted due to Covid-19 and the chariot procession too.

The chariot pulling by women are now well organized and with much security. According to Mrs. Prajapati there are 13-core team, each chariot being looked by four core team members. Mrs. Prajapati is responsible for overall processions management. The security is also arranged with women police throughout the processions.

The organization committee has made mandatory to register for those interested to pull. After which they get a pass and a T-shirt, which is to identify actual chariot pullers. Some women are also trained before the procession by Maha, the person who sits at the front of chariot and directs the chariot.

Mrs. Prajapati shares her experience that when they started they were not organized as now. On first year they just pulled the chariot of Goddess Kumari, even they were suggested to pull just a short distance if it was difficult. With proud smile she further adds that they completed the whole route. Women, girls and teenagers all came to participate on that historic day. After the event they received much support and media exposure, and were encouraged to pull all the chariots from next year.

Following the women taking lead in procession, the drinking of alcohol which flows from the giant Swait Bhariav Mask was started by women as well, designating fixed day for just women.

Young girls are also seen playing different traditional musical instruments on this festival as well as in several other festivals.

Now days there are a considerable active participation of women in many festivals, not holding the backstage positions of cooking and making arrangements.