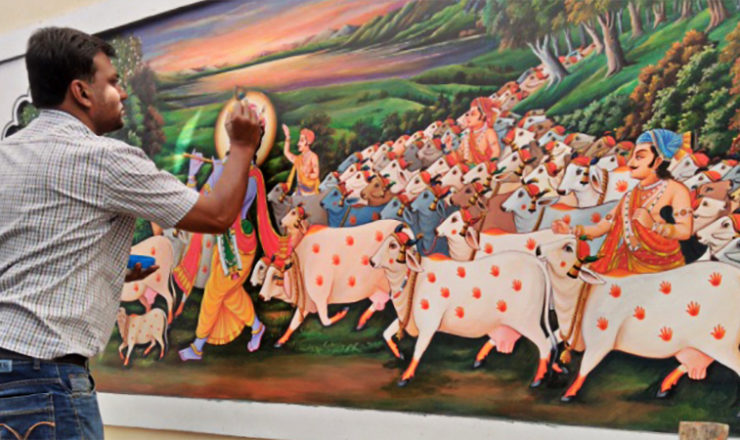 Nathdwara is a famed Vaishnavite pilgrimage site in the Aravalli Hills, fifty kilometers northeast of Udaipur, Rajasthan. Hundreds of thousands of devotees annually visit its central Shrinathji Temple to worship a fourteenth century icon of Shrinathji, a beloved child incarnation of Lord Krishna.

Besides Shrinathji’s sanctum, Nathdwara was also widely known for its unique regional arts—the worship-related pichwai paintings that depict Krishna’s life stories for the unlettered and the reverential semiclassical haveli sangeet music that was sung and played directly to Krishna. The area was also famous for delightful terracotta sculptures that portray sacred images from the countryside and touching scenes of village life.

In recent years, however, haveli sangeet has lost its following, and few young musicians try to learn its demanding dhrupad-based songs. Similarly pichwai painting and local terracotta arts have fallen on hard times. While there is still a bit of tourist interest in these ancient traditions, the impact of western fashion, mass advertising, and globalized culture have driven both out of vogue domestically.

Most of India’s religious institutions confine their efforts to purely spiritual endeavors, but given Shrinathji’s long intimate relations with the town’s cultural life, the temple took notice of its artists’ plight. The Nathdwara Temple Board, Shrinathji’s managing trust, and trustee Sri Vishal Bava suggested providing some kind of innovative platform for artists to showcase their paintings and crafts on the crowded streets outside the temple.

Sri Dinesh Kothari, Nathdwara Temple Board CEO, took this concept and designed a project called Wall of the Lord that used a broad empty stretch on the temple’s own outer wall as a public gallery. Approximately 140 pichwai painters have now completed 63 masterful paintings on this 180 meter expanse, in styles ranging from traditional and devotional to expressively modern. Three exquisite large terracotta murals have also been installed there, and together, these exhibits not only beautify the temple but also offer dramatic visibility, hopefully renewing market demand for struggling local ICH artists.

Launched on 26 January 2017, the novel Wall of the Lord initiative has already started attracting its own audience as a must-see site of the Nathdwara pilgrimage that reminds visiting devotees of the splendor of their heritage and the inseparable nature of creativity and the divine.