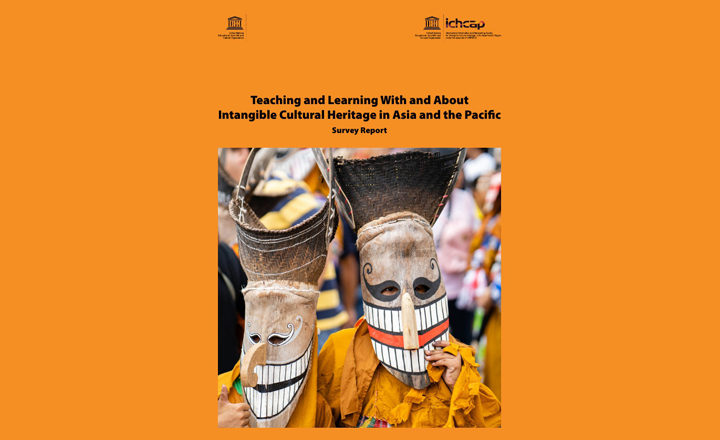 UNESCO has officially published a report on a basic survey on the use of “living heritage” in school education in the Asia-Pacific region. The report was a result of a basic survey conducted jointly by the UNESCO Bangkok Office and ICHCAP in 2019, sponsored by the Cultural Heritage Administration of Korea, and was written based on 777 responses from 170 schools in 21 countries in the Asia-Pacific region.

Living heritage—music and dance, rituals, knowledge about our environment, etc.—is everywhere around us. This is a survey on how students are exposed to such living heritage in the school education field, the current status of teaching ICH in schools (subjects, frequency, etc.), the degree to which it is reflected in educational policies, the status of support for ICH education and collecting information on best practices. It was translated into eleven languages, including ten Asia-Pacific languages and English, and was divided into two types, for school officials and teachers.

Of the final respondents, 71 percent were teachers, and 29 percent were school administrators. 55 percent of the responding schools were located in suburbs, and 45 percent were located in cities. There are differences in the number of responses as well as the school environment due to differences in survey distribution networks such as UNESCO Cooperative Schools (ASPnet) from country to country. Nevertheless, about 86 percent of respondents are in an environment where they can access the ICH of the community, and about 72 percent of respondents said that students can access relevant information. In addition, the report introduces the status of ICH in school education in Asia-Pacific in detail by mentioning the current status and specific examples of specific countries with relatively high response rates.

In addition to conducting the basic survey with the Bangkok office, ICHCAP held the ‘Conference for Strengthening ICH Education in ‘Asia-Pacific ‘ in 2019. In 2020, follow-up measures, such as holding a workshop for expert training for the training of teachers of ICH in the Asia-Pacific region was taken. Through the official publication of UNESCO, it is expected that more people will be introduced to the current status of ICH in school education in the Asia-Pacific region.