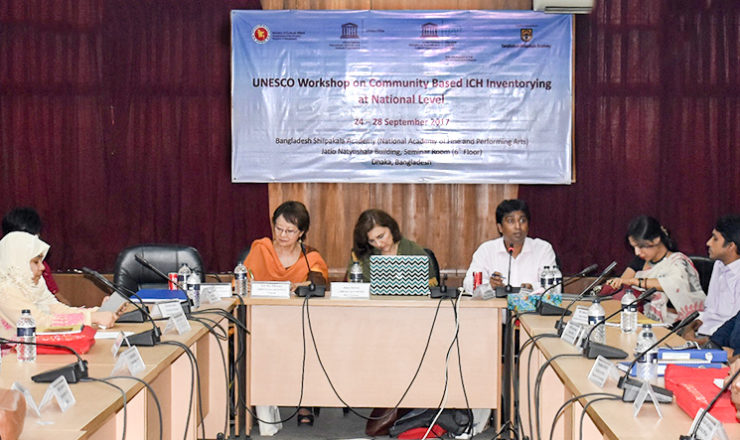 The UNESCO Dhaka Office, in association with Bangladesh Shilpakala Academy, organized a five-day workshop on community-based intangible cultural heritage inventorying that was held from 24 to 28 September 2017 at the academy. The workshop was a part of a series of capacity-building trainings aiming at strengthening the national institutional capacity of Bangladesh to implement the Convention for the Safeguarding of the Intangible Cultural Heritage.

Around twenty-five government officials participated in the workshop. They represented different agencies under the Cultural Affairs Ministry, such as Bangladesh Shilpakala Academy, Bangla Academy, Bangladesh National Museum, and Bangladesh Folk Art and Craft Foundation. The workshop featured a field visit and sessions on different topics like ‘Inventorying ICH and the Role of Communities’, ‘Engaging with Communities’, and ‘ICH and Sustainable Development’. At the workshop, two UNESCO-accredited ICH trainers—Alex Denes and Noriko Aikawa—discussed what community-based ICH inventorying is and the techniques of making it. They also explained national-level ICH inventorying in light of the 2003 Convention.

The workshop was the second installment of the ongoing three-year US$200,000 project titled “Strengthening the Capacities of Bangladesh for Implementing the 2003 Convention for the Safeguarding of the Intangible Cultural Heritage”, which is funded by the UNESCO Intangible Cultural Heritage Fund with the generous contribution of the Republic of Azerbaijan. The first installment of the capacity-building trainings took place from 29 January to 1 February 2017. It was meant to provide an overview of the Convention and its implementation, addressing the obligations of Bangladesh as a Member State and the possible ways to safeguard its living heritage with the full participation of relevant communities.

After the country’s ratification of the 2003 Convention in 2009, Bangladesh has yet to create its ICH inventory. So far, three Bangladeshi ICH elements are inscribed on the UNESCO’s Representative List of ICH: Baul songs, Traditional Art of Jamdani Weaving, and Mangal Shovajatra.