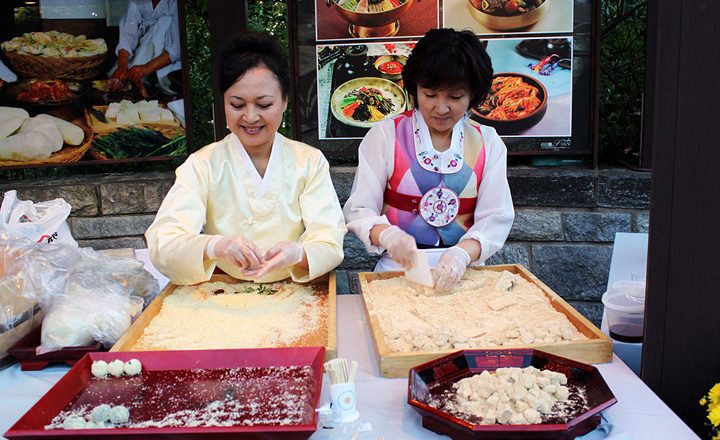 Koreans have made tteok by steaming grain flour in siru, a traditional steamer, or by boiling or baking, depending on the type of the rice cake being made. From a long time ago, Koreans have enjoyed making and sharing different kinds of tteok for major milestones in their lives as well as for important national holidays.

Historically, rice cakes have been a key offering for various rituals. They include rites held for village gods wishing for peace and prosperity as well as similar rites held for house gods like sangdalgosa. Rice cakes are also offered at gut rituals held by traditional shamans. In modern-day Korea, people distribute tteok to others in their community when they open a business or move into a new place.

In many ways, tteok is more than just a delicacy—given that Koreans distribute rice cakes to others for special moments of their lives, it can be considered an embodiment of sharing and generosity as well as a symbol of the unique Korean concept of jeong or a deep connection and harmony.

It is also notable how different types of rice cake are made for different occasions and how they have a story of their own. This makes tteok intangible cultural heritage that people need to learn to fully understand Korean culture.

It is unclear when Koreans started making rice cakes. However, archaeological findings show that Koreans have been eating rice cake since ancient times. Siru has been unearthed in historic sites of the bronze age and iron age. Siru can also be seen in the mural of fourth-century Anak Tomb No. 3 in South Hwanghae, North Korea.

More information about the history and significance of tteok in Korean culture can be found on the website of the Cultural Heritage Administration: http://english.cha.go.kr/cop/bbs/selectBoardArticle.do?nttId=79521&bbsId=BBSMSTR_1200&pageIndex=1&pageUnit=10&searchCnd=&searchWrd=&ctgryLrcls=&ctgryMdcls=&ctgrySmcls=&ntcStartDt=&ntcEndDt=&searchUseYn=&mn=EN_01_01