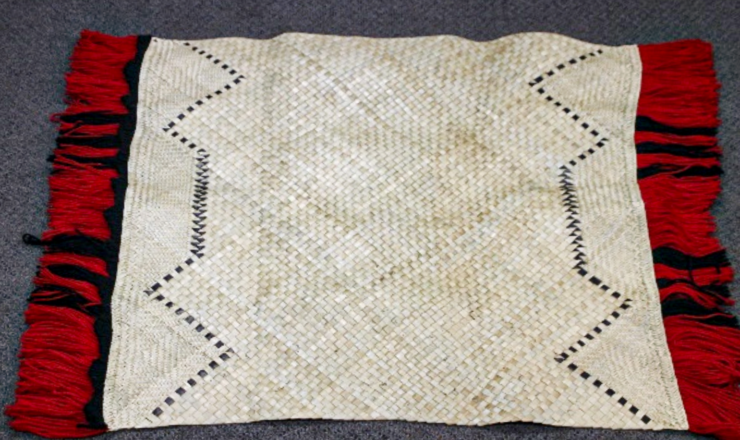 Ibe vakaurua that woven for one person, the chief, to sit on © iTaukei Institute of Language & Culture

The pandanus is used throughout the Pacific as a source of leaves from which mats and a number of other artefacts are made. Several species of pandanus are or have been used in different places. In Fiji, the balawa (P. odoratissumus) is sometimes used for large coarse mats but not used very frequently. The draudreka (P. whitmeeanus) is also used. The leaves of this species may yield a browner fibre that the usual voivoi (P.caricosus).

In most villages in Fiji, voivoi is the only species cultivated. Each village has an area where voivoi is planted and cultivated. Although most of the vegetable crops and yaqona (Piper methysticum) are grown in the hills at a distance from the villages, in the case of voivoi, the garden is right near the village. The reason does not seem to be merely convenience of harvesting as it is easier to transport a bundle of voivoi leaves than a basket or sack of yams. It relates to the lighter and sandier soil which exists on the coast where the villages are situated and which is said to suit voivoi, and the fact that while it doesn’t like wet roots, it does like a lot of water. Throughout Fiji there is a diversity of traditionally made mats that are iconic to a chiefdom, a chief and its geography. These traditional mats are seen as traditional gifts or heirlooms only for a chief and are of much value in trade and in social activities. Generically mats are called ibe in Fiji and the measurements vary from baby mats to living room sized ones. With the different sizes also comes specific names.

There are also many motifs woven into mats. These motifs are woven from black voivoi. This is the usual voivoi that is dyed using traditional means. Along with the motifs, the name of the mat changes where the motif becomes a suffix to describe the ibe (mat). One such iconic mat is called the ibe vakaurua.

The word vakaurua is made from two words – vakau which means to send, and rua meaning two. The ibe vakaurua is only iconic to an island in Fiji’s Lomaiviti Province. The island is called Nairai. Unlike other mats in Fiji, the pandanus for the ibe vakaurua is double layered and woven in such a way that there is no underside. All other mats have an upper side for sitting and an underside that faces the floor.

The story behind the design and creation of the ibe vakaurua is a testament of a mother’s love for her two young sons. The story goes that long ago, a delegation from Nairai Island approached the warlords of the domain to ask for a prince there to become the chief of Nairai. The warlord chief agreed and chose his elder son Bukatatano to be groomed and become the chief of Nairai. The warlord’s second and younger son, Ravuravu asked also to accompany his elder brother and it was agreed.

Because the warlord had uttered a traditional directive, it was to be followed by his people. The mother of the two princes could not go against the traditional directive and complied but with a very heavy heart that only a mother knows when parting with her children. The affection of the mother was channeled into the design and creation of the ibe vakaurua. The name of the mat forever memorialized her affection and the send of her two young princes to return with the delegation from Nairai Island.