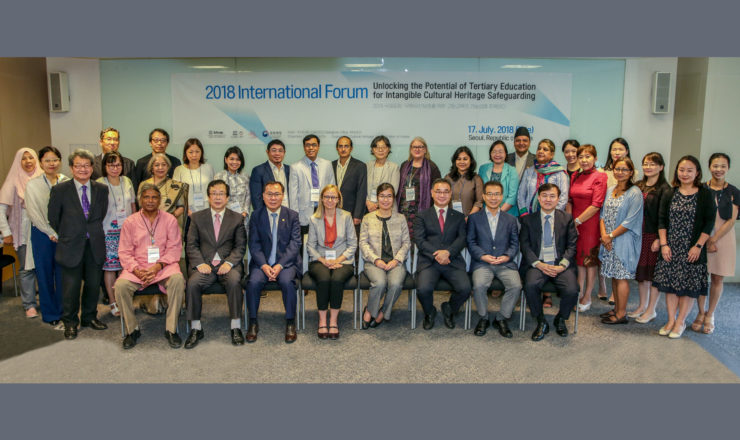 ICHCAP hosted the first Higher Education Network Meeting in cooperation with UNESCO ICH Section and UNESCO Bangkok Office on 18 and 19 July 2018 at Korea National University of Cultural Heritage in Buyeo, Republic of Korea. Asia-Pacific-based higher education institutions that both see the possibility of integrating ICH in their existing programmes and provide ICH-related courses and degree programs participated in the meeting. The meeting resulted to an agreement of establishing a higher education network and naming it as Asia-Pacific Higher Education Network for Safeguarding Intangible Cultural Heritage (APHEN-ICH).

Responsive to the need of establishing a network that chiefly provides a linkage among higher education institutions that play a role in ICH safeguarding, ICHCAP has collaborated with partner institutions to prepare a solid foundation for such project. The following activities have afforded to unshroud key issues in the integration of ICH in tertiary education, capacities to strengthen, and goals to pursue: the 2017 survey of higher education institutions in the Asia-Pacific region in cooperation with UNESCO Bangkok Office and the roundtable side event entitled “Intangible Cultural Heritage and Tertiary Education” at the Twelfth Session of the Intergovernmental Committee for the Safeguarding of the Intangible Cultural Heritage held in December 2017.

Thirty-five representatives from nineteen universities and institutions in eleven Asia-Pacific countries graced the meeting and gave shape to a plan to establish a network. Among the primary concerns at the meeting included a clear system through which the network will operate, specific areas in research and other academic activities that the network should give priority to, and ways in which the network will best support would-be members of the network. Once the draft Network Statutes are finalized, the Secretariat will collect official membership application from universities and institutions wishing to be a member of the network. People and institutions involved in this project expect a solidly founded network of higher education institutions for ICH safeguarding with clear goals and its sustainable growth.

Meanwhile, ICHCAP hosted an international forum entitled “Unlocking the Potential of Tertiary Education for ICH Safeguarding” , on 17 July at Somerset Palace Seoul in Seoul, Republic of Korea. The forum was held in cooperation with UNESCO Bangkok Office and Korea National University of Cultural Heritage, reflecting the collective interest of stakeholders in the region to build a network. ICH education experts from twelve Asia-Pacific countries attended the forum to discuss the state of ICH education as provided by universities in the Asia-Pacific region and community-based approaches for ICH safeguarding. Participating experts shared ICH-related university curricula and discussed the roles and importance of tertiary education institutions in the safeguarding of ICH through community-based curriculums.

ICHCAP will continue to support a variety of cooperative projects to invigorate ICH research in facilitating sustainable exchanges among member universities and institutions in the Asia-Pacific region. For any inquires about the network, particularly membership application, please contact ichcap.networking@gmail.com.