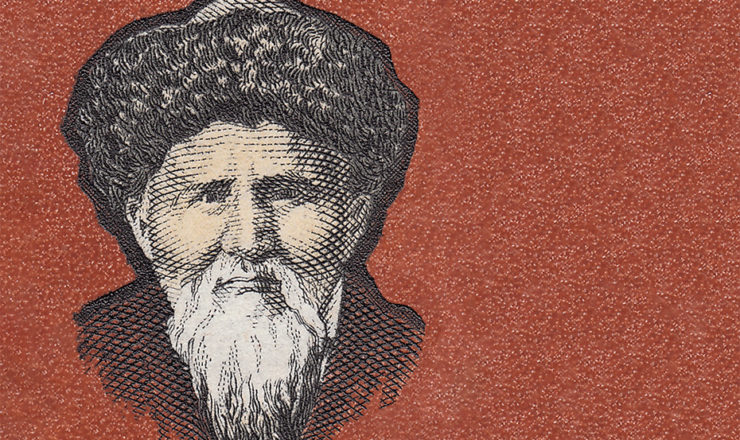 Toktogul Satylganov was a great composer, poet, akyn (singer-improviser), and komuzist (someone who plays komuz, a traditional Kyrgyz musical instrument). Satylganov rendered a great contribution to the Kyrgyz culture. He sang about hardships of the common people, and he is best known for his songs about freedom and independence during the Tsarist Russia’s colonial era. He is one of the founders of Kyrgyz Soviet Literature.

Toktogul Satylganov was born in 1864 to a poor family in Toktogul district of the Djalal-Abad region. He never formally learned to write and read, but at the age of 13, he learned to play komuz by himself and started to compose songs about poverty and cruelty of feudalism. In 1898, he was jailed and sentenced to death because of false allegations of him participating in the Andijan rebellion. Eventually, his punishment was reduced to a seven-year imprisonment in Siberia by the mercy of the Tsars. His work at the Siberian labor camp intensified his understanding of social inequality and the inhumanity of feudalism. For that reason, Toktogul Satylganov was the first akyn to welcome the Bolshevik Revolution in 1917, the revolution by the peasants and working people and led by Vladimir Lenin against Tsar Nicholas II.

Accordingly, Toktogul Satylganov is known for his outstanding works that made a great contribution to the Kyrgyz literature. During the Soviet period, his songs played an important role in shaping public opinion. His songs are informative, vividly depicting the life of ordinary people, the beauty of the motherland, and the Communist Party during the Soviet era. He was the first to depict Vladimir Lenin in What Kind of Woman Gave Birth to a Son Like Lenin? that came out in a time now regarded as the beginning of the Kyrgyz Soviet literary history. His songs predicted the end of tsarism, praising laborers’ rights that encouraged many people. Therefore, many Kyrgyz poets and composers were influenced by Toktogul Satylganov and his work has been translated into many languages.

Toktogul Satylganov played a significant role in traditional Kyrgyz art. The art of akyn, the predominant form of cultural expression of nomadic Kyrgyz people, was inscribed on the UNESCO Representative List of Intangible Cultural Heritage of Humanity in 2008. Tokotogul Satylganov has been and continues to be honored by a number of poets and in books, scholarly works, movies, and discourse around musical heritage. The Kyrgyz National Philharmonic Building in the center of Bishkek is named after him. In addition, a city, streets, districts, parks, schools, libraries, and even the biggest hydroelectric power station and reservoir are named after him as the great composer, poet, akyn (singer-improviser), komuzist who was the most influential figure in traditional Kyrgyz art and literature.