Tò he: Folk toys capture the heart of children and adults in Hà Nội 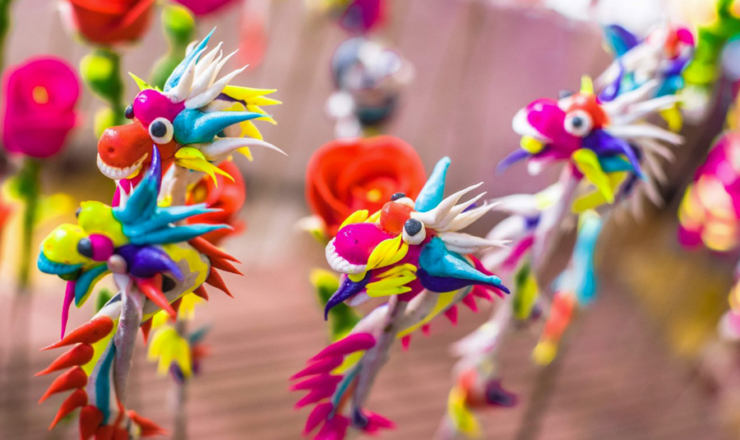 Dragons and roses are two among the most common tò he figurines. ⓒ Nguyễn Phú Đức

When strolling the pedestrian zone around Hoàn Kiếm Lake in Hà Nội, one may be attracted by a man sitting behind a small wooden box filled with colorful figurines. With only a small bamboo stick in his hands, the man can create beautiful roses, lively dragons and legendary generals in their elaborate costumes. It takes only ten minutes for him to complete the creation of a figurine. This man is a tò he maker.

Tò he, as briefly described, are figurine toys popular in Hà Nội and some other provinces in the Red River Delta of Vietnam. Traditionally, the common figurines depicted flowers, animals, historical figures and characters in folk tales. Nowadays, a diversity of new figurines can be made, adapting from famous cartoon and movie characters whom children adore. They range from Doraemon, Sailor Moon to Elsa Princess.

The about-10-centimeter figurines seem to be simple at the first sight but what make them really stand out are the sophisticate craftsmanship and great passion of their makers. The first step of making tò he is to prepare the dough by pouring fresh water into a mixture of glutinous and regular rice powder. The dough then is dropped into the boiling water for about one hour. The final step of making the dough is to divide it into different portions and dye them with food colors. There are seven basic colors used in tò he figurines: green, pink, red, violet, yellow, white and black. The dough must be carefully prepared to ensure the edibleness of tò he, which is a unique characteristic of these folk toys.

The creation of tò he figurines requires another great amount of patience and skillfulness. Every small detail is kneaded by hand, and different colors are applied without never staining one another. Therefore, seeing a favorite character coming to his/her life on the hand of the tò he maker is like watching a magic trick for many children.

With several anecdotal evidence, the history of tò he is said to date back to the 17th century. Xuân La, a suburban village in Hà Nội, is the home of most active tò he craftsmen. Every day, tò he makers from Xuân La spread out to different corners of Hà Nội to sell their craftworks.

In the past, tò he figurines were only sold during Tết (Vietnamese New Year) and Trung Thu (Mid-Autumn Festival). Therefore, getting these figurine toys from their parents could bring immense joy for children who had waited for them for such a long time. These days, tò he can be found almost every day at several major parks and tourist attractions in Hà Nội, such as the walking streets around Hoàn Kiếm Lake, Văn Miếu (The Temple of Literature) and the Museum of Ethnology. Tò he craftsmen are also present at many cultural events in different parts of Vietnam.

For many people in today’s Vietnam, tò he can evoke their beautiful childhood memories. And for children, tò he can bring them into a colorful world of creativity and imagination. While tò he, as such, currently enjoys considerable vitality despite the invasion of children’s modern toys and games, more efforts are required to make in order to keep this folk art continuously alive and flourishing. Making new figurines that are closer to children’s daily life is one of the directions almost tò he makers have been following. In addition to that, tò he craftsmen and those who love tò he have organized several tò he making classes where children and adults can learn about the history of this folk art and get hands-on experience of tò he making.