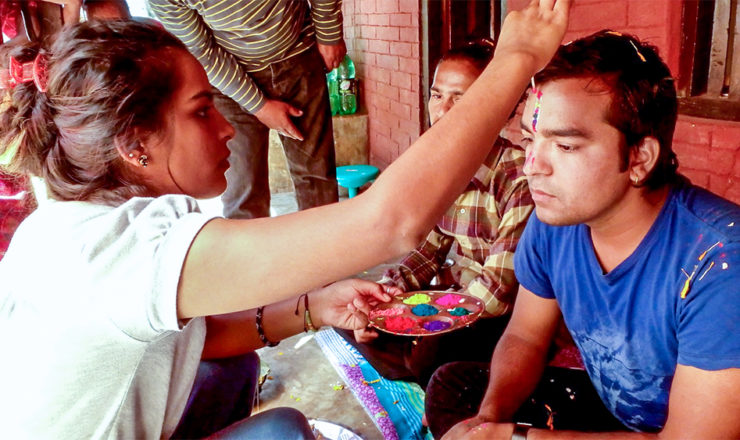 Tihar (also known as Deepawali, Diwali, or Yamapanchak) is the most celebrated festival in Nepal. It takes place on Kartik Krishna Pakshya (early or end of November) every year. The five-day-long festival is observed with various activities—the longest of which is the successive worship activities of animals.

On the first day of the festival, Kaag Tihar (crow worship) is celebrated by offering sweets and foods to birds, especially crows. In Hindu mythology, crows are considered the messenger of Yama (lord of death). As the cawing of the crows symbolizes misfortune, the devotees feed crows to avert grief and death they may cause. On the second day of the festival, Kukur Tihar (worship of dog) is celebrated by offering garlands, tika (red-colored paste), and delicious food to dogs. Dogs occupy a special place in Hindu mythology. As mentioned in the Hindu epic, Mahabharata, Bhairava, a fierce manifestation of Lord Shiva, had a dog as a vahana (vehicle). Yama, the god of death, is believed to own two guard dogs, each with four eyes. The dogs are said to watch over the gates of Naraka, the Hindu concept of hell. In the morning of the third day, Gai Tihar (worship of the cow) is celebrated by offering flower garland, tika, food, and grass to the cow. In Hinduism, cow signifies wealth and prosperity. In the evening, Laxmi, the goddess of wealth, is thanked for all the benefits families may have received by lighting diyo (oil lamps) or candles on doorways and windows; this gesture also welcomes prosperity and well-being. On the fourth day, Goru Tihar (worship of ox) is observed in similar way. Ox is regarded as the closest and most important animal as it assists Nepalese farmers to plough their land for farming. The fifth and the most notable day of the festival is Bhai Tika or Kija Puja. It is observed by sisters applying tika on the forehead of their brothers to ensure long life and prosperity. The Bhai Tika follows a traditional ritual in which brothers sit on the floor and sisters circle brothers three times, dripping the undefiled water (pure; not drunk by anyone) on the floor from a copper pitcher. Then sisters break the walnut with the stone which is placed on the middle area of the main door of the house, wishing that they could alleviate their brothers’ grief.

Another distinctive feature of Tihar is deusi or vailo, the traditional songs that are sung during the festival. Vaili, a group of people with musical instruments visit houses one by one to sing and dance mainly in the night. The host families highly appreciate the visit of Vaili to their homes and offer rice, fruits, roti (home-made round bread), and some money. A traditional oil lamp on a brass plate or on nanglo (a flat round woven tray made up of bamboo) is lit in the presence of Vaili. It is believed that Vaili blessings bring happiness and prosperity to the family.

Tihar is considered a culturally essential festival in Nepal as it preserves Nepalese traditional beliefs, recognizing not just the importance of human prosperity but also the significance of animals in the life of Nepalese cultural heritage.