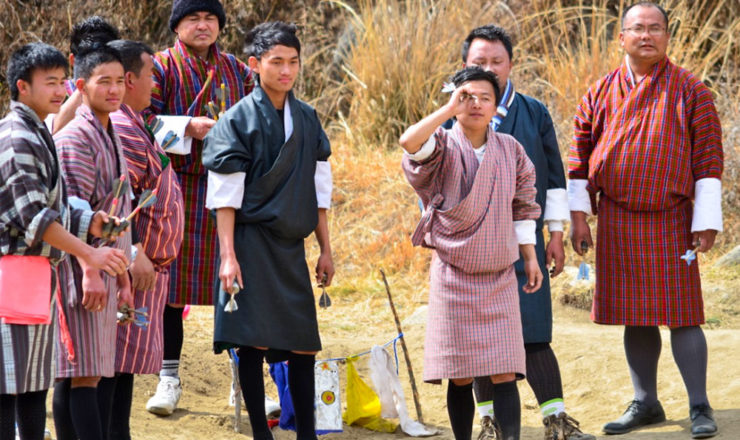 Among fifteen national festivals celebrated in Bhutan, Thruebab or Thrübab is considered a grand event observed not only by the Bhutanese but also by Tibetans. It is a spiritual event that roughly falls between 20 and 25 September coinciding the early date of the eighth month of the Bhutanese calendar. Based on the etymology of Thruebab (thrue—wash, bath, holy water; bab—descend), the Buddhist term literally means “holy water descending”. Due to climate change, however, there is an unexpected shower and sometimes not a single drop of rain (or holy water as it were) from the sky. Regardless, the day of Thruebab is widely known as Blessed Rainy Day. The significance of the day is well connected to the view of both astrological and philosophical texts of Tibetan Buddhism. A special star, believed to be Rishi, is formed by crystal (chu-shel) and a gemstone (ketaka). With similar precious stones, an image of Vairocana Buddha was said to be erected by the great yogis with prayers to fulfill the wishes of all sentient beings. While the star Rishi revolves around the mythological mount Meru, it’s calculated that the star reaches directly above the Buddha’s figure exactly on the early date of the eighth lunar month emitting divine water drops from the collusion of rays from the star and from the Buddha’s crest. Both the rays and water drops permeate the streams and rivers of the world with immense healing power and blessings.

Thruebab, as an officially declared holiday, is observed by the whole of Bhutan. Various media platforms predict the beginning of the descent of the holy water and cover the entire event. However, the descent may happen early morning, after dawn, or sometimes even at noon. If it happens early in the morning, people would fill a container of flowers with the water falling down and keep it outside their house to receive the light of Rishi. As the descent happens, people use the water in taking a bath and drinking. Although Thruebab is primarily a spiritual event, people also take advantage of it to celebrate. They would take shower in open streams, ponds, or water taps and wash their clothes. Elderlies merrily shout Thrue! Thrue! Thrue! It means “cleanse us of sins and diseases”. Taking a bath is certainly the highlight of the day.

The program is then followed by making offerings and prayers. After supplication, family members gather in the dining room to eat rice porridge called thugpa as served either by the mother or eldest daughter. After this, families either visit temples and monasteries or go out for a picnic with relatives, friends, and neighbors. While men often play traditional games like archery, women sing and dance to give the game more elements of entertainment. Thruebab is considered as an integral part of intangible cultural heritage of Bhutan, fortifying social cohesion among the people. It engages people with religious activities and connects them to natural resources.