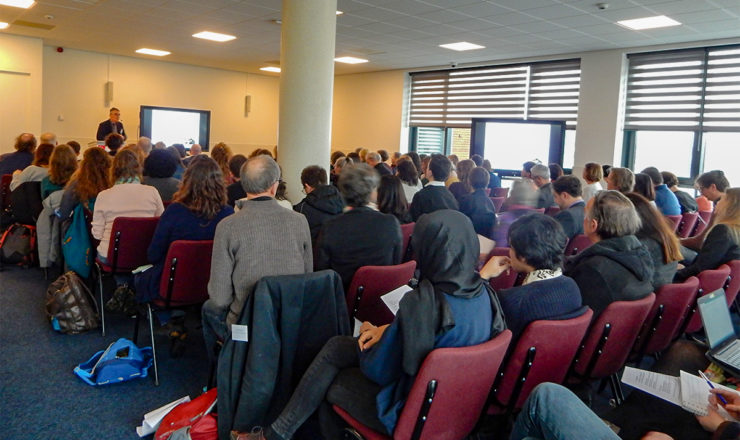 A two-day conference on 15 and 16 February 2018 was held in Utrecht. In cooperation with the University of Utrecht, Workshop Intangible Heritage Flanders (previously known as Tapis Plein) and the Free University of Brussels UNESCO Chair on critical heritage studies and safeguarding ICH, the conference was organized by the Dutch Centre for Intangible Heritage, Flemish Interface Center for Cultural Heritage (FARO), German Commission for UNESCO, and the National Commissions for UNESCO in Belgium and the Netherlands.

With the main agenda of discussing and thinking about intangible cultural heritage (ICH) in the age of superdiversity, it was organized within the context of the European Year of Cultural Heritage 2018. Keynotes, case studies, presentations, sharing of experiences, and interactive group discussion were done during conference. Not only the presentations and subject of discussion were interesting, but also the venue, the Ulu Mosque located at the Moskeeplein in Utrecht.

Joris van Eijnatten, Head Department of History and Art History of Utrecht University, started the conference with a welcome speech in the superdiverse city of Utrecht. Formal remarks from Christoph Wulf, Vice-President of the German Commission for UNESCO, and Dutch Centre for Intangible Cultural Heritage and Utrecht University’s Albert van der Zeijden followed. On the first day, a markedly diverse band named Sahin had a small concert in the street, performing music from the different countries.

Keynote speakers as well as most of the presenters stressed the need for superdiversity in an age of globalization. Keynote speaker Prof. Roel During from Wageningen University stated during his presentations that society becoming fragmented is raising problem, not diversity. Other keynote speakers were Wolfgang Kaschuba (whose presentation was presented by Christina Mathew), Jenny Phillimore, Monika Salzbrunn, and Helmut Groschwitz.

On the second day after the welcome speech by Kees Diepeveen (Alderman of the municipality of Utrecht), Tim Curtis, Section Chief of Secretariat of the UNESCO Convention for the Safeguarding of the Intangible Cultural Heritage, gave a short message with examples from various countries on how ICH help in integrating and safeguarding the sustainability of cities.

While the keynotes speakers were stressing the need of superdiversity, the presentations in the parallel sessions also examined case studies on the superdiversity of European cities, highlighting issues and challenges. Among the case studies presented, one was Murga Movement in Flanders, which is a form of street theater combining music, dance, spoken or sung texts, and dress. It historically constitutes elements from Spain and Africa traveling to Argentina and Uruguay and again back to Europe. It started in Antwerp as a reaction against hate crimes based on religion and race. The first Murga group from Argentina was formed in 2007 to promote social cohesion and intercultural dialogue, which gave rise to the whole artistic movement. The first group was dissolved since 2013 due to a lack of funding.

Most of these ICH elements—significant in thickening the diversity of urban spaces—face crucial challenges in light of their continuity due to many factors although prominent among them are insufficient funding and disinterested public (specifically young generation) not participating in initiatives of their safeguarding.

On the whole, the conference was very interesting as it addressed current issues that many European cities are confronting. It consistently iterated that ICH can be used as a source for fostering social cohesion and cherishing diversity.