The Tradition of Acheik Weaving in Myanmar 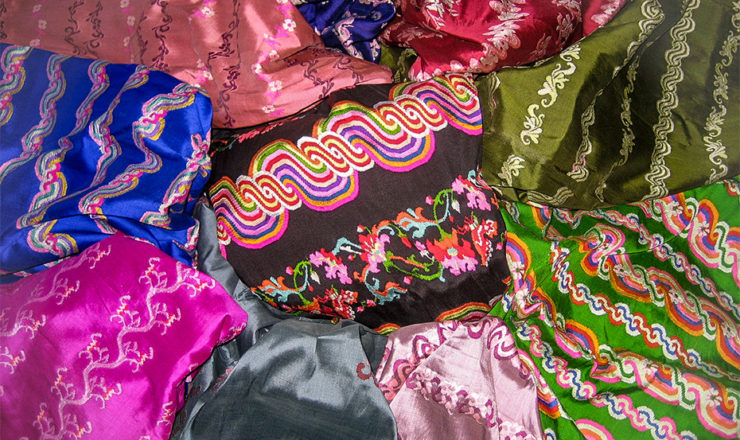 In Myanmar, people wear traditional clothes, prominently acheik longyi (skirt) in events such as weddings, novitiation ceremonies, and national gatherings. When you find a lady wearing acheik longyi abroad, she is certainly from Myanmar. Myanmar people regard acheik textiles an important aspect of the identity of the people of Myanmar, representing tradition and practice of a thriving culture.

Luntaya acheik is an indispensable item that projects the social status of women. The term lun means shuttle and taya means a hundred. Acheik, on the other hand, means connect, and it is also the term for tapestry weaving methods. So luntaya achiek is a kind of woven cloth with threads crossing under and over each other on plain textile using many shuttles. Acheik textiles have flourished since the nineteenth century CE. During the ancient period, achiek was used for royal costumes; ordinary people were not allowed to wear achiek. The highest ranking officials, royal services, and merchants could only wear achiek if the king rewarded them. Until now, achiek workshops are mainly based in Amarapura, Sagaing, and Mandalay in upper Myanmar.

For the weaving process, three of four raw silk threads are twisted tightly with the aid of a machine for tautness and smoothness. After that, silk-woven faces are removed by washing in boiling nut soap liquid. This step helps the fabric become softer than ordinary silk thread. While boiling the silk, colors can be added to dye the thread. And then, the dyed threads are washed with water and placed under the sun to dry. For weaving, the silk threads are kneaded onto bobbins, and then the bobbins are attached to the loom; the weavers will then weave the desired achiek patterns. Between one hundred and three hundred small bobbins are used to weave intricate and complex acheik designs. Traditional acheik have a lot of names according to the designs, depending on the color usage and the number of small bobbins. There are fifty-two kinds of classic achiek designs, and they are expensive as it takes many days of manual labor to produce achiek textiles.

Nowadays, cotton and silk are mixed and Achiek designs are modified to produce cheaper versions by weaving machine. Though handmade achiek textiles are expensive, Myanmar ladies proudly wear this classic design textile pattern for both special social and religious occasions. Since Myanmar people have worn acheik designs during special events and ceremonies since ancient times until today, Myanmar acheik continues to be a living heritage. The weaving practitioners relentlessly transmit their knowledge and skills to the young generation.