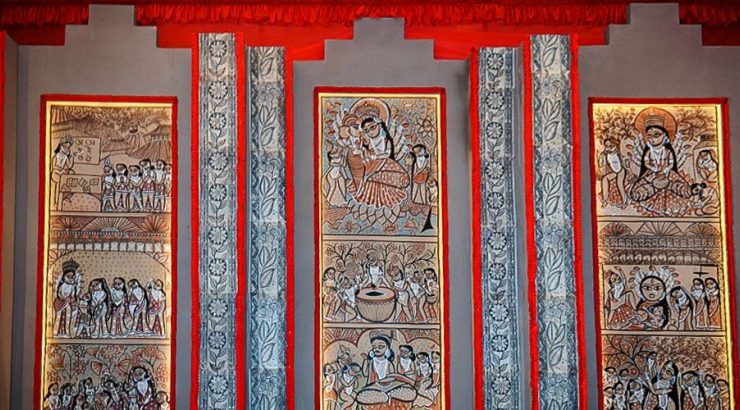 Durga Puja sits at the core of Bengali identity in India. It is also the biggest annual festival in the Indian state of West Bengal. Held in autumn, between September and October, Durga Puja is essentially a Hindu religious event, but the celebrations transcend all barriers of religion and creed, generating a night-long carnival of the masses for four to five days.

The phenomenon of Community Durga Puja, organized by residents of different localities, adds a unique social dimension to the festival. There are thousands of committees which organize Community Durga Puja across West Bengal. Teeming crowds zigzag their way through a maze of roads, streets, and lanes in the city of Kolkata all through the night. They come in droves—in cars, in taxis, and on foot—to catch glimpses of the idols, lights, themes, and the pavilions housing the deities called pandals. Over the years, the social-liberal polity of Bengal has accommodated a vast range of socio-cultural themes as well as various folk art and craft forms in the design of the idols, pandals, and illumination at the community Durga Pujas. The entire city of Kolkata becomes a public art space.

The photograph shows a pavilion celebrating intangible cultural heritage in the festival this year, held from September 26 to September 30. This Community Puja titled ‘Swarna Chitra’ is named after the leading woman scroll painter Swarna Chitrakar. Swarna is an exponent of Patachitra, a traditional storytelling art form of West Bengal where the artist sings the story while unfurling the scroll.