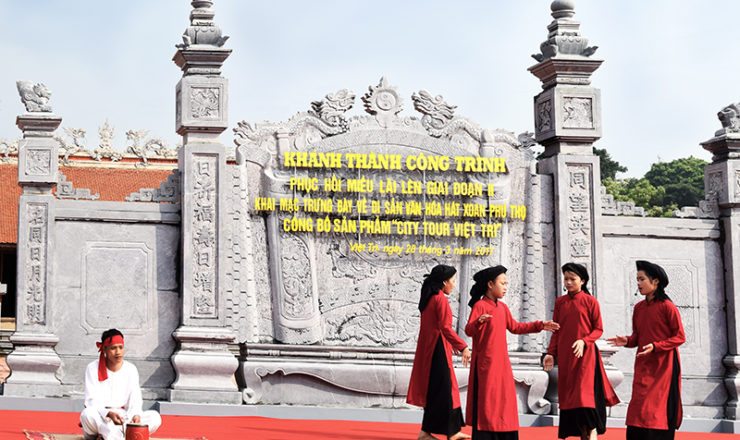 In marked contrast to the traditional past, Xoan is now widely performed by young practitioners © Le Thi Minh Ly

In just six years, an important element of intangible cultural heritage went from being an element in need of urgent safeguarding to being an active part of the lives of Vietnamese people. The Hat Xoan Phu Tho tradition, a distinctive call-and-response musical genre of Phu Tho Province in northern Vietnam, was inscribed on the UNESCO List of Intangible Cultural Heritage in Need of Urgent Safeguarding in 2011, and as a result it became the focus of an extensive revitalization program to ensure its survival.

A unique blend of song and dance performance, xoan originated in the upland region of Viet Tri in Phu Tho for the people to express the richness of their community lives. Some of the performances are to venerate ancient kings while others are expressions of the people’s skills and artistry or their knowledge of farming, fishing, hunting, weaving, and other rural crafts. xoan is considered the core and essence of the social and cultural identity of the villages of Phu Duc, Kim Dai, Thet, and An Thai.

Since 2011, the state and local communities have been supporting a project to revitalize xoan. A series of creative collaborations between knowledgeable elder practitioners and a nucleus of over sixty younger artists have committed themselves to xoan practice and dissemination and have subsequently secured xoan transmission to future generations. Training classes are held monthly and weekly within the communities. An active set of xoan guilds with as many as a hundred members of three or even four generations of practitioner families are successfully recruiting new adherents.

To generate an audience for the genre, xoan has been introduced into the regional school curriculum as a reference point for teaching on issues of heritage and local history. Demonstration activities and social events outside the xoan communities, have attracted young people and increased their understanding and enjoyment of xoan.

Within the xoan communities, many of the temples and shrines used for performances had deteriorated because of war and time, becoming unusable. The state, however, has allocated priority funding to restore these performance areas. Through the government-funded program, community members are fully involved in the restoration and have been empowered to manage their own cultural spaces. On 28 March 2017, the country’s largest site for xoan practice was inaugurated in Kim Duc, a commune of Viet Tri. Legend has it that this space, within the Lai Len temple in Kim Duc, was the first site of xoan performance in Vietnam.

Through these unique programs, xoan communities have become vibrant places of practice and the transmission of xoan.