The Recipe and History of Thai Tomyam Kung 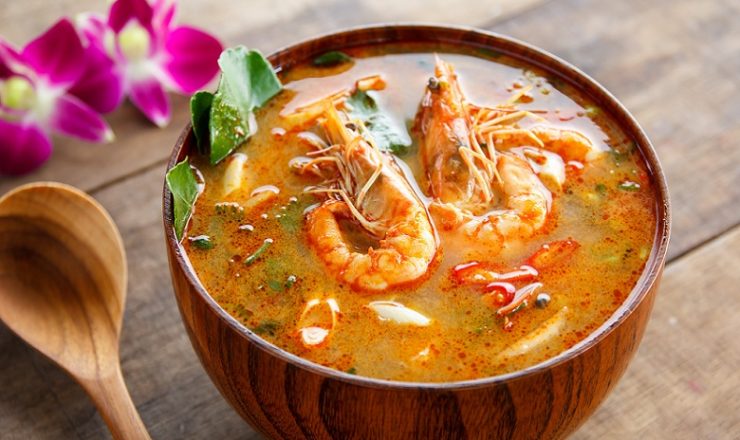 Tomyam kung, or spicy shrimp soup, is a typical Thai dish that became popular only 50 years ago. Tomyam kung is a hot soup made by mixing various ingredients, including herbs, in boiling water. The basic ingredients include ground cilantro root, lemongrass, galangal, torn kaffir lime leaves, lime juice, fish sauce, bird’s-eye chilies and shrimps. In addition, mushroom, tomatoes, and onions may be added depending on preference.

The word “tomyam” is a compound word in the Thai language. It consists of two words — “tom” and “yam,” which mean “boiling” and “mixing,” respectively. These two words refer to the Thai cooking process.

Tomyam is a traditional Thai dish originating from the country’s central region. The oldest recipe was found in King Rama V’s reign. It was stated that only snakehead fish and stingray should be used in tomyam pla, or spicy fish soup. There are some secondary sources referring to dishes that had similar ingredients and recipes to tomyam kung. However, they still lacked some of the important ingredients that are familiar in the dish today, such as lemongrass, galangal, and torn kaffir lime leaves.

The very first “tomyam kung” recipe appeared in a book, Khong Sawoei (Thai royal cuisine), written by Mom Rajawongse Kitinadda Kitiyakara. The writer cooked fresh shrimp soup for His Majesty King Bhumibol Adulyadej The Great (Rama IX), Her Majesty Queen Sirikit, the Queen Mother, and the prince and princesses at the Klai Kangwon Palace, Hua Hin, in 1962. The recipe started with the instruction to make a soup from shrimp shells and heads, seasoned with fish sauce, kaffir lime leaves, and lemongrass. This was then strained to retain only the broth, which was poured into a bowl of boiled shrimp and seasoned with lime juice. Ground chilies and more fish sauce were added before serving.

The precise flavor of tomyam kung has never been fixed; it can be seasoned according to the consumer’s preferred tastes. However, a basic recipe is as follows:

There are in fact types of tomyam kung: clear and thick. The clear soup is the original style, while coconut milk is added to make the thick variety.

Tomyam kung is a Thai national soup that very popular among both Thais and non-Thais. It has high nutritional value and is not too spicy. Its fragrance derives from vegetables and spices that are thought to help blood circulation, bringing good health. Tomyam kung is a very popular dish in every Thai restaurant. In addition, many popular snacks and instant noodles also use the flavors of tomyam kung.

In 2011, tomyam kung was inscribed by the Department of Cultural Promotion, Ministry of Culture on the list of National Intangible Cultural Heritage under the domain of Knowledge and Practices Concerning Nature and the Universe. Recently, the government of Thailand is seeking to have tomyam kung listed by UNESCO as part of the country’s cultural heritage.