The Many Faces of Ramayana through the Lens of Benoy K. Behl 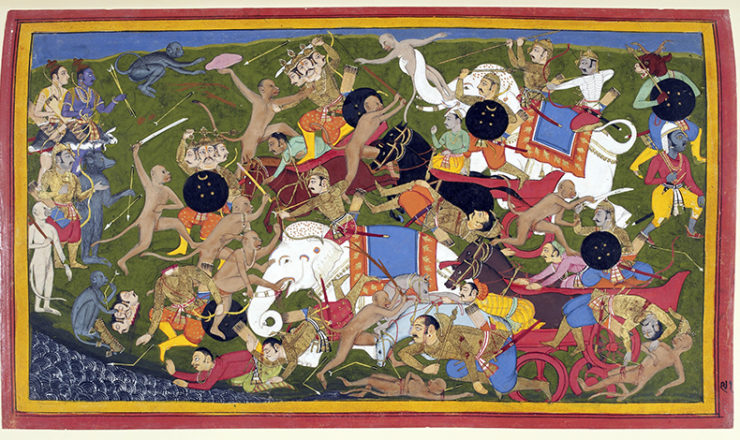 The Battle at Lanka, Ramayana © Sahibdin

Benoy K. Behl is described as one of the great art historians of India by various media platforms. He has a record of taking more than 35, 000 photographs and producing more than 100 documentaries. It is possible to draw forth a comprehensive visual imagery of Buddhist art in India and other parts of Asia through his outputs over the years; a subject that is beautifully explored in his work.

With the support of the Ministry of External Affairs, Government of India, Benoy K. Behl has created another landmark project: a documentary on Ramayana as staged in India and beyond. Entitled Ramayana: The Great Epic of South and Southeast Asia, Behl’s most recent documentary had its world premiere at the Asian Art Museum in San Francisco, California on 3 December 2016.1. The documentary is generally a montage that presents Ramayana performances from nine countries such as Bhutan, Cambodia, India, Indonesia, Lao PDR, Nepal, Singapore, Sri Lanka, and Thailand. It decisively attests to the claim that there was indeed a close historical cultural contact between Hindu India and Asia; this is among other things crucial to say about the documentary.

As current discourse on contemporary cultural production tends to emphasize the importance of transnational and diasporic tendencies, it should be noted that Behl’s documentary reflects previous studies on Ramayana, specifically the account of it being seriously regarded outside India. For example, Santosh N. Desai, in the essay Ramayana—An Instrument of Historical Contact and Cultural Transmission between India and Asia2., provides a useful cartography about how Ramayana travelled from North and Northwest Asia to Southeast Asia. In addition, Desai states some important details about how Ramayana was recreated into a text once taken from its geographic and anthropological origins, deviating from the Valmiki original version.

Behl’s documentary on Ramayana gives a capacious effort to bridge the cultural gap between understanding Ramayana as a literary text and appropriating it as a performance text. It speaks of how literature can be a medium of exchange, surviving ancient stories which in some ways have shaped taste and perception across lands and generations. More importantly, it captures the evolution of an old and transcendental text as it is staged and performed in many Asian countries. As each country featured in the documentary showcases an appropriation of Ramayana different from the rest in terms of theatrical elements, Behl’s documentary shows that performing arts can be a vehicle to share cultural differences.

Documenting the movement of a text that has always been a part of tradition—from how it was once told to how it is received in the present—is itself an act of preservation. It immortalizes the journey of inheritance and reinforces the ways in which individuals appreciate their cultural roots.