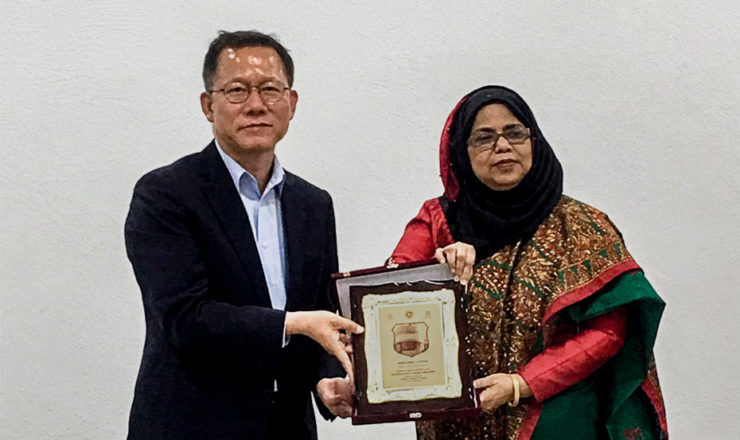 The science and art of locating and enriching cultural heritage is a set of non-linear processes that all begin with language. Language in itself is a cultural heritage thereby a deep familiarity of its creation, evolution, usage, and the contexts within which it was repressed and liberated in colonial history are important to people especially in the developing world. Focusing on mother languages, the International Mother Language Institute (IMLI) persists to recognize how mother and indigenous languages enable societies to push plans and actions for development, peace building, and reconciliation.

Led by Ms. Khadiza Begum (Joint Secretary & Director of Language, Training & Planning) on 25 April 2019, a delegation representing IMLI visited ICHCAP to introduce their institute and hear from ICHCAP contingents about the center’s role in ICH safeguarding, previous projects relevant to Bangladesh, and thoughts on how the center might be involved in language-specific initiatives in the context of ICH safeguarding.

The Language Movement initiated by Bengali-speaking people in then-Pakistan in 1952 is a historic moment sitting at the core of the establishment of IMLI. Notions of language rights, narration of identity from one’s own tongue, and self-expression are important to their initiatives. In the mind of IMLI, societies are capable of integration and sustainability when their inhabitants are free to speak their mother languages without having to face political persecution and systematic disenfranchisement. Their efforts, among many others, promote the right to education with one’s mother tongue being the medium of instruction and further collaboration in research and studies for the development of mother languages to protect the values of diversity and multiculturalism. Since its inception as a UNESCO Category-2 Centre in January 2016, IMLI has extended the Bangla language within and beyond Bangladesh, conducted research on language movements across cultures, initiated relevant training programs, prepared and updated textbooks and other educational materials, maintained a research journal dedicated to studies on mother languages, and organized seminars, symposiums, and workshops on language and education.

Having co-worked on a many projects with other Bangladeshi institutions to promote ICH from online exhibitions to publications, ICHCAP welcomes collaboration with government agencies in Bangladesh on projects involving language and education. ICHCAP is also interested in promoting ICH safeguarding projects dealing with issues on mother languages to continuously advocate for harmony and cultural viability.