The Food of Singapore Malays 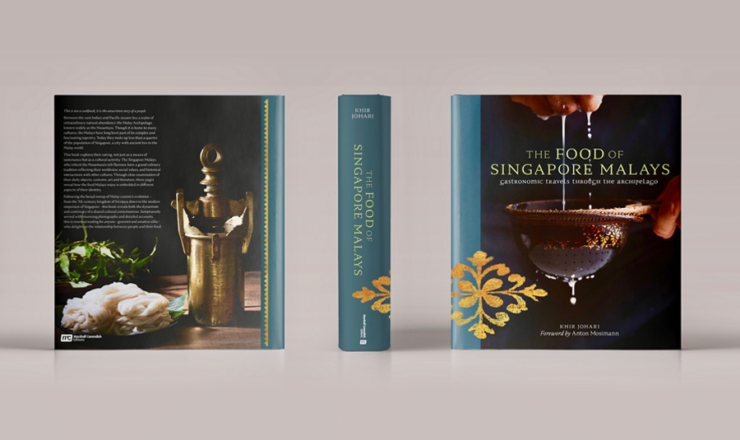 Food historian and Malay history and culture researcher, Khir Johari, recently launched a publication which details the history, culture and evolution of Malay food. Titled “The Food of Singapore Malays: Gastronomic Travels Through The Archipelago”, the 624-page publication contains over 400 photographs of food and culture, and 32 recipes for key Malay dishes.

The encyclopaedic publication explores the cultural anthropology of Malay food and was painstakingly put together over the period of 11 years. During that period, the author poured over research materials; interviewed Malay elders for forgotten or disappearing dishes, their ingredients and their preparation; and spent time with communities in Singapore, Indonesia and Malaysia.

The first section focuses on “People, Space and Place” and explores the long and complex history of Malays in the Nusantara(a region encompassing Indonesia, Malaysia and Singapore) while the second section delves into “Indigenous Ingenuity” and covers little known facts about foraging knowledge, techniques of preparation and preservation.

The third section look at “Food as Civilisation” and narrates the significance of Malay food as a recurring theme in Malay folklore, songs, poetry and mythology, and the final section on “Food and the Policies of Identity” frames Malay cuisine as the result of the region’s centuries-old global trade and the cultural exchanges that result from it.

The highlights of the publication include write-ups on the origins and diversity of kuih(bite-sized snack or dessert), how foraging contributed to the evolution of Malay cuisine, food as restorative medicine, the art of plating in Malay cuisine as well as recipes for Malay dishes such as sayur lodeh(vegetable stew in coconut milk), mee siam(rice vermicelli served with sweet, tangy and spicy gravy) and pindang serani(a light, tamarind-based fish consommé).

With the publication of “The Food of Singapore Malays”, Khir hopes to document and pass down the cultural traditions of Malay food practices and principles; develop an awareness and appreciation of the Malay community’s dishes and their recipes; and instil a sense of pride amongst the readers in the gastronomic traditions of the Malay Archipelago.