The five-day festival of Tihar 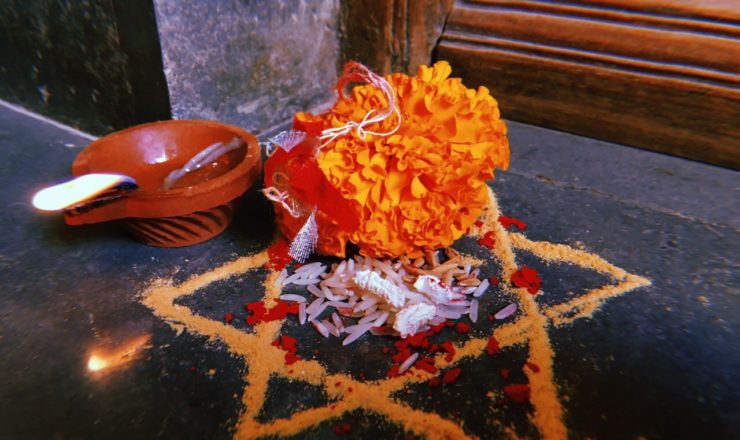 Tihar is one of the most popular festivals of Nepal. This five-day festival has something that relates to almost every community dwelling in the country. It is both a religious and a cultural festival that reminds us about the importance of human relations and that with nature and its various components.

In Teria, the southern region of Nepal, it is celebrated as Dipawali. Houses are decorated with oil lamps to welcome Lord Rama, who is returning with his wife, Sita, to his kingdom after 14 years of exile and defeat of the demon king, Ravana. In the hilly region, it is celebrated as Tihar with the honoring of the goddess Lakshmi, and sisters bestowing blessings upon their brothers. In the Kathmandu Valley, it is known as Swanti among the Newar community and is celebrated with much fanfare. Tihar also holds special significance within the farming community. It marks the end of the harvest season and thus the filling of the granaries and store houses or rooms with ample produce to last for a year.

The five-day festival, also referred to as Panchak, honors Yama, the lord of death, and is mainly dominated with the worship of the goddess Lakshmi, the giver of wealth according to Hinduism, as well as appreciating animals that are connected closely to humans. Houses are cleaned and decorated with oil lamps and marigold garlands, in preparation for the festival. In modern times, colorful strings of flashing electric lights have begun to replace traditional oil lamps.

The festival commences with the kaag puja or tihar, which is the worship of the crow. According to the Hindu epic Ramayana, the crow was cursed as well as blessed by Lord Rama during his exiled years. The curse was that it could use only one eye at a time and the blessing was that it could see what other eyes cannot see—spirits and departed souls. In this regard the crow is seen as the connection between the living and the dead, thus it is appeased with offerings of good food placed in an open area outside the house.

The second day honors the dog, called the kukur tihar. For thousands of years, humans and dogs have shared a very special bond and the dog has often been referred to universally as “man’s best friend.” Dogs are specially venerated on this day as an appreciation for their loyalty and for guarding our homes. Red tika is applied to their forehead and a pretty garland placed around their neck. Special treats are fed to the dogs, and the best part is that, besides domestic pets, street dogs are also treated with equal reverence.

The third day begins with the worship of the cow in the morning and the goddess Lakshmi in the evening in the hope she will bless and bring fortune to the worshiper. Posters of the deity are purchased beforehand and, for the ritual, pasted in safes, lockers, or where monetary transactions take place. The ritual is then performed in the evenings, beginning with the lighting of oil lamps, chanting of mantras, and making of offerings to appease the goddess of wealth.

The fourth day celebrates the ox, the Govardhan Puja, another faithful and very useful animal in Nepali culture. Being an agrarian state, depending heavily on agriculture for sustenance, the ox has played a major role in plowing the fields and pulling carts in the absence of modern technology. This day has another very important significance to the Newar, or locally community of the Kathmandu Valley. It is the “Mha Puja,” or the day to cleanse and worship oneself. The elaborate ritual starts in the evening with the making of a mandala and lighting an oil lamp on it. All family members are seated in front of their own mandala, cleansing themselves of the sins of the past year and enriching themselves both physically and spiritually with energies for the coming year. Coincidentally, the Newari New year (Nepal Smavat) is also celebrated the same day with much fanfare, bike rallies, and traditional music.

The fifth day is the Bhai tika, a much-awaited day for both brothers and sisters. Although different communities all over Nepal celebrate it in their own way, the meaning of the ritual is for sisters to ask God for long life, good health, and prosperity for their brothers. The sister applies the tika to her brother’s forehead, and decorates him with garlands of flowers. Traditionally, she prepared a whole array of edible goodies for her brother, although today this has been replaced with attractively packaged imported treats. In return, the brother blesses his sister and gifts her cash and sometimes various other tokens. They then sit and make merry, exchanging sibling love and respect with good food and drinks. For those who do not have a sibling to celebrate with, there is a tradition of going to specific temples.

In sum, Tihar is a celebration of humans and their relations with each other. It also celebrates the relations between humans and animals, thus emphasizing the importance of a harmonious ecology for a better spiritual and social life, a tradition that we should persevere to continue and hand down to newer generations. This year, the festival falls between October 26 and 29.