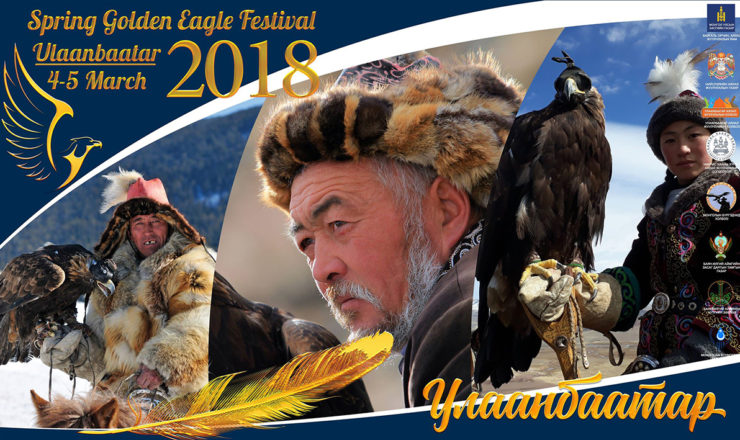 The Spring Golden Eagle Festival will be held at the Chinggis Khaanii Khuree Tourist Complex in Bogdkhan Uul, near Ulaanbaatar, Mongolia, on 4 and 5 March 2018. While the Golden Eagle Festival is traditionally held on the first weekend of October annually, this is the first festival of the same nature to be held in spring. The festival’s general organizers include Ministry of Nature and Tourism Mongolia, Ulaanbaatar City Tourism Department, Ulaanbaatar Tourism Association, Mongolian Eagle Hunters Association, Chinggis Khaanii Khuree LLC, and Bayan-Ulgii Aimag Government Agency.

This two-day festival is being prepared to celebrate the falconry heritage of Mongolia and to promote it to both tourists and families in the eastern and southern parts of the country. Falconry was inscribed on the UNESCO Representative List of the Intangible Cultural Heritage of Humanity in 2016. This is going to be the first large-scale eagle falconry festival to take place on the region. So far the eagle falconry tradition has been celebrated in the westernmost provinces of Mongolia and nearby villages in Kazakhstan.

In the opening ceremony, eagle hunters from Kazakhstan and West Mongolia will parade while demonstrating their best costumes and equipment. The main programs of the festival are Chargai, eagle calling, and traditional game competition such as Kokpar or goat dragging. In Chargai, eagles show their skills at catching their pray. Eagle Calling, on the other hand, is to showcase the intellect of eagles in following the command of their master. Finally, Kokpar or goat dragging is a game of possessing goat skin that is played by teams; Tenge-Alu is the object of the game.

Dolkinsuren Enkhtaivan, the person-in-charge of media inquiries at Chinggis Khaanii Khuree LCC, said that they are promoting the festival on television and social networks. It is expected to be an amazing event where many people in Mongolia can enjoy its intangible cultural heritage. Interested individuals and parties may find more detailed information about the festival in its website.