The festival of harvest: Onam 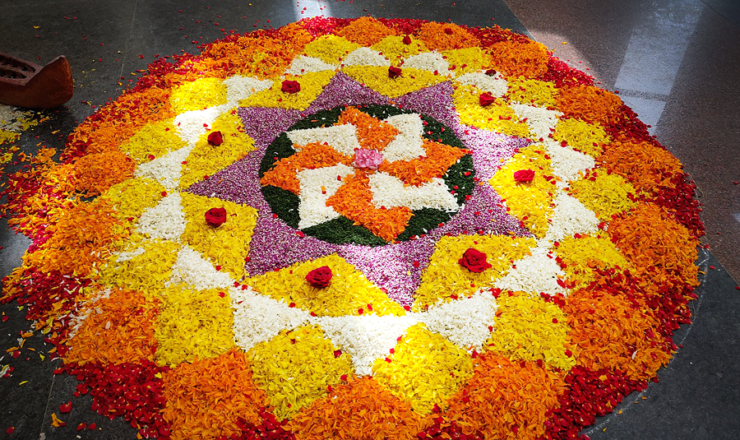 Onam is a major harvest festival celebrated in the Indian state of Kerala. The 10-day Onam festival marks the onset of the first month according to the Malayalam calendar called Chingam and generally occurs in the months of August or September every year. Due to the COVID -19, the festival saw major restrictions, however, it was celebrated with much enthusiasm between 12th August until 23rd August 2021 keeping in mind all the COVID protocols.

The origin of the festival can also be traced from various regional sources. According to the folk song ‘Maveli Naadu Vaanidum Kaalam’, Mahabali was a very kind-hearted and generous king. Under his rule, there were no theft, lies, hunger, or jealousy among his people. It is said that people were so happy under his rule that they no longer felt the need to pray or make offerings to the Gods. He was beginning to rule all three worlds which infuriated Lord Indra and gods. To take control of the situation, Lord Vishnu took his fifth avatar of a Brahmin dwarf named ‘Vamana’. As Vamana, he appeared before Mahabali and made a wish for three feet of land for penance. In his first and second steps, he covered the heavens and the hell. Mahabali, seeing this, offered his own head for the third step. Impressed by this action, Lord Vishnu appeared as himself before Mahabali to bless him. Lord Vishnu granted a boon to Mahabali that he can visit his beloved people once a year. As a result, the homecoming of king Mahabali is celebrated as Onam.

Onam combines elaborate festivities that include food, dance, cultural clothing, flower decoration, etc. Each house performs such functions with sheer enthusiasm and love for our culture while supporting agricultural practices. One of the most popular components of the festival is the food. Onam Sadhya is a multi-course meal that includes 26 different food items prepared with local ingredients. Some of the dishes include Rice, Avial (a dish prepared by cooking vegetables in mango and ground coconut), Olan, Sambhar, Rasam, banana and jaggery chips, Pappadam, followed by at least 2 varieties of Payasam (a milk-based sweet prepared with rice, wheat etc). These are only a handful of items prepared in the diverse state of Kerala also known as the land of spices.

The other aspects of the festival include elaborate decorations that include the extensive use of local and colorful flowers. Pookkalam (floor designs with flowers) are made every day of the festival and various games like Vadam Vali (tug of war), Puli Kali (folk art from Kerala), Vallam Kali (Boat Race), are played during the festival.

The festival is a great reflection of the cultural heritage of Kerala. Families are seen wearing traditional attires that include Kasavu/Set Sarees for women and Mundu for men. There is a tradition of gifting new clothes called Ona Kodi to other members of the family. The festival is celebrated with great energy with the enthusiasm of beginning a new year according to the Malayalam calendar in Kerala.

The author would like to thank and acknowledge the contribution of various people from Kerala including Aravind Nair, Kavya Nair, Mariam Rauf, Sarath Ninan Mathew, Vishnu Vijayan, and others who have shared valuable information about the festival.