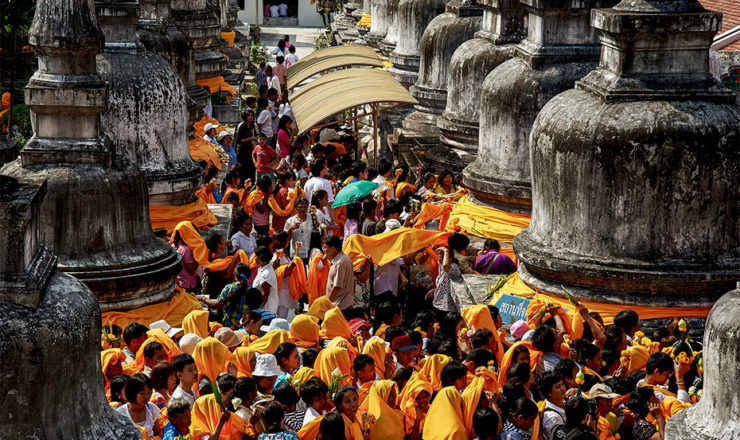 Derived from a Buddhist belief, the Hae Pha Khuen That Festival is centuries-old and still practiced to today. The event is a gathering of Buddhists parading in streets, carrying cloth called pha bot to wrap around the stupa that houses the relic of Buddha. According to the legend, the tradition of wrapping cloth around the stupa originated during the reign of the King Si Thamma Sokkarat, the first monarch of the Tam Porn Link Kingdom and founder of Nakorn Si Thammarat. At that time, the stupa had been just built, and the king heard that some people on a voyage to Sri Lanka to bring pha bot as an offering had sunk into the sea due to a violent storm. The King then decided to bring the cloth to wrap around the newly made stupa to pay homage to Buddha and celebrate his new constructed relic house.

Nowadays, Hae Pha Khuen That takes place yearly at Wat Phra Mahathat Worramahawihan, a royal temple in Nakorn Si Thammarat Province in southern Thailand, where the aforementioned stupa is located. The event is held on the full moon day of the third lunar month (Makha Bucha Day), a religious holiday; it usually falls in February. This year, it will be held from 13 to 19 February 2019. The most important activity of the event is carrying the pha bot to warp around the main stupa, inside of which is the relic of Buddha. Locals of Nakorn Si Thammarat and people from other parts of Thailand are expected to take part in a parade carrying more than a thousand yards of yellow or white cloth from the main city to the temple and walk around the stupa three times before covering the stupa with the cloth. It is believed that participating in the activity brings good luck to life and families.

In addition to wrapping cloth around the main stupa, there will be lots of entertainment and cultural activities such as chants, sermons, meditation, food offerings, exhibitions, and a cultural product market as well as light and sound shows all day and all night during the festival. Hae Pha Khuen That is famous all over Thailand. In 2014, Hae Pha Khuen That Festival was inscribed by the Department of Cultural Promotion, Ministry of Culture, as National ICH in the category of Social Practices, Rituals and Festival. The festival has been in practice for generations, celebrating the blessing of and faith in Buddha.

A festival guide for 2019 is available online at http://www.thaifestivalblogs.com/hae-pha-khuen-that-festival/