Sur Jahan 2020: The Festival of Plurality 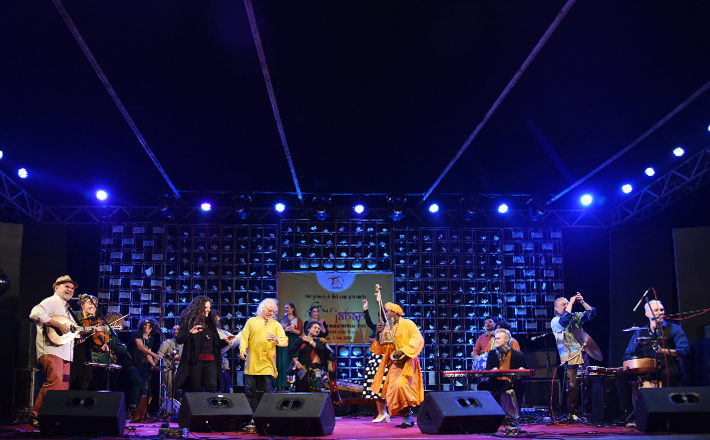 Sur Jahan 2020 was held at Kolkata from 31 January to 2 February, 5 to 7 February at Goa, and 8 to 10 February at Jaipur. The world peace music festival with a motto, “Music for Peace, Music for All” saw an ensemble of artists coming from India, Sweden, Denmark, South Korea, Hungary, Reunion Island, and Bangladesh. The festival of pluralism and cultural diversity brought together on one stage artists like Mamadou Sene from Senegal, Greek dancer and singer Maria Stellas who performed along with the legend of Swedish Music, Ale Moller. Shafi Mandal from Bangladesh mesmerized the audience with his soulful voice. To bring out the cultural diversity, Radiant Arcadia from Denmark had musicians from Spain, Syria, and Ireland singing together a combination of Nordic and Celtic folk and jazz music. The Bauls of Bengal, Folks of Bengal, and Manganiyars and Langas of Rajasthan presented some of the most ecstatic traditional folk and Marwar Lokgeet and Sufiyana kalam. The inauguration was marked by the presence of Rajiva Sinha, IAS, the Chief Secretary of West Bengal and Johannes Therur, Secretary of European Broadcasting Union, Founder Director of World Music Chart Europe and one of the senior most radio journalists at Radio Berlin. The festival was attended by more than ten throusand people.

South Korea in contemporary times has been making rounds in global music. This time we invited Coreyah, a multiple award-winning South Korean band an ensemble consisting of six members who were able to captivate the crowd through their music. Among them, three members played traditional Korean instruments such as goemungo (komungo) and traditional drums, whereas one of them was the vocalist. Their multilayered soundscape encompassing traditional as well as global music gained much love at the world peace music festival and especially at the workshops that were held during the morning hours. The three day music festival also had traditional craft of West Bengal, Odisha, Bihar and Rajasthan and the artists of these states were able to interact with their customers and create a network of their market linkages.

The people had a chance to learn more about diverse culture and their music through the various workshops where each team showcased their traditional musical instruments The workshops and the festival at night being so lively brought the audience to their feet to dance along joyfully, thereby concluding the three-day music festival.