Speaking of Culture from Below: Interview with Dr. Marc Jacobs 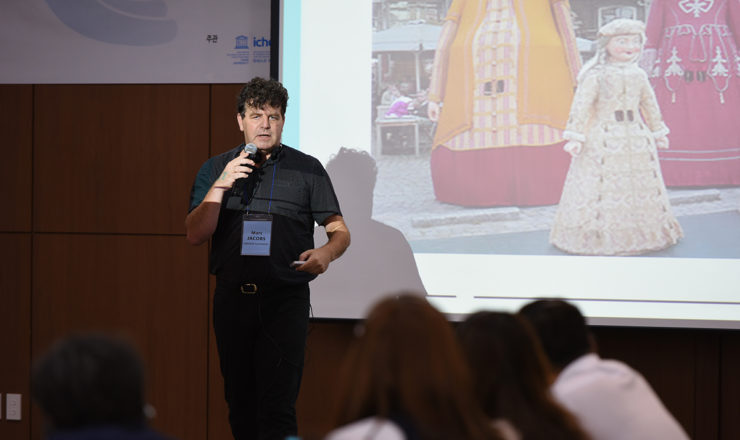 During the UNESCO Workshop on Strengthening National Capacities for Effective Implementation of 2003 Convention held from 10 to 13 July 2017 in Jeonju, South Korea, Mr. B.B.P. Hosmillo, ICHCAP’s Associate Expert, interviewed Dr. Marc Jacobs, a UNESCO facilitator and professor of critical heritage studies and European ethnology at Vrije Universiteit Brussel. They discussed some concerns about intangible cultural heritage not only as a study interest, but also as a field where public practices and perceptions of culture and tradition are deliberated. The interview below is an excerpt of B.B.P. Hosmillo’s one-hour-long conversation with Dr. Marc Jacobs:

How long have you been working in the field of Intangible Cultural Heritage?

When the concept started to be internationally known, that is from the year 2001. I think the first time I heard about intangible cultural heritage was probably in 2001 in a meeting in Paris where it was when the conversations in UNESCO started and a number of people had already been working on the topic before. A meeting was held by Cherif Khaznadar who was the chairperson of the Maison des Cultures du Monde and of the French UNESCO Commission. He invited us to Paris to discuss whether or not we agree about the terminology (intangible cultural heritage) and at that time I was working at The Center for Popular Culture in Flanders. That center was created in 1999 as stipulated in a decree on popular culture, which was adjudged in Flanders in 1998. I had the chance to be engaged, and right from the start. I’ve witnessed the whole movement grow and I also participated in discussions so I’m also partly responsible, probably, for the vagueness of the concept.

The concept of intangible cultural heritage has strong European roots. Although ICH is a pretty new field, there’s a global effort in understanding what ICH is and might be. What is the implication of the European influence in understanding ICH today as it has become a global field?

I’ve been working on so many decades (in the field of critical heritage studies) and the pressure to have a convention was mainly coming from Japan; the East Asian country financed the whole movement. Speaking of the drafting of the Convention in 2001 to 2002, the strong pressure to do something about the concept of intangible cultural heritage indeed came from East Asia.

Meanwhile, I think the influence is partly that there were a number of scholars working on folklore studies, who rejected the term’s attachment to essentialism and wanted to do something new. We rejected essentialism; that there is something like an essence of a people or national identity or national character or an ethnic character. This is something I still reject. The idea of deconstructing and reconstructing is probably what this European generation, especially western European generation has introduced into the debate. There were people, mainly anthropologists from all over the world, who tried to fight the idea of essentialism, tried to hold back the notion of “masterpieces”; and that “unique” elements can be defined. I think we’re partly responsible by fighting against that system. We would propose that there would be no masterpieces and no representative list. There have been so much discussions going on ever since and I’m not sure how it will be resolved, but personally I’m very glad that it’s an open discussion.

Given your long history of presence in the field of ICH, what kind of involvement do you go back to, something that you deeply remember as an individual?

Many things. I like the fact that the notion of intangible cultural heritage has been accepted worldwide. In my own country, what I can call as “culture from below,” culture from ordinary people is now being taken seriously and that’s something important for me because I have always been interested in it even if I saw people looking down on it.

The second part that I’m glad about is our attention on the capacity of ICH-related efforts to generate resources for workers in developing countries. In Belgium, we embraced the Convention and developed it into a national policy. It’s also interesting that by talking about intangible cultural heritage we could generate money for development aid.

Lastly, there is a “case” that makes all the circus of the intergovernmental committee and the UNESCO meetings worthwhile for me. I was partly involved in one form of intangible cultural heritage that was included on the list of intangible cultural heritage in Flanders. This year, it received the Flemish National Prize for Heritage Research. This is the project: in a city in Flanders, a group of farmers, a large group of farmers has been accepting and adopting people with mental illness for more than five hundred years. These adopted people with mental illness work on farms. They are accepted as members of the community. Again, this practice has been going on since the 19th century. I like it because, on one hand, it’s something unusual and it’s definitely intangible heritage. On the other hand, even if it’s on the intangible cultural heritage list in Flanders or in UNESCO, it’s very hard to exploit it from a touristic point of view. I think the fact that it was possible to recognize this form of heritage makes the field worthwhile.

You are in Jeonju to facilitate the UNESCO Workshop on Strengthening National Capacities for Effective Implementation of 2003 Convention. How important is this workshop?

I hope it is useful; that it would stimulate discussions. I see that most people here are asking questions and are very well-aware of the Convention, its problems, ambiguities, and potentials. I can contribute to this gathering by sharing my critical view on the Convention, how it is being implemented. Moreover, I want to show a sense of enthusiasm to work in the spirit of the Convention. I hope I can transfer both feelings. Be critical, but be enthusiastic. Try to combine both. It is nonetheless important for me to learn from this experience, something I will take home, partly by discussing with people and observing what is happening here. I am so hopeful to observe the next days in Korea.