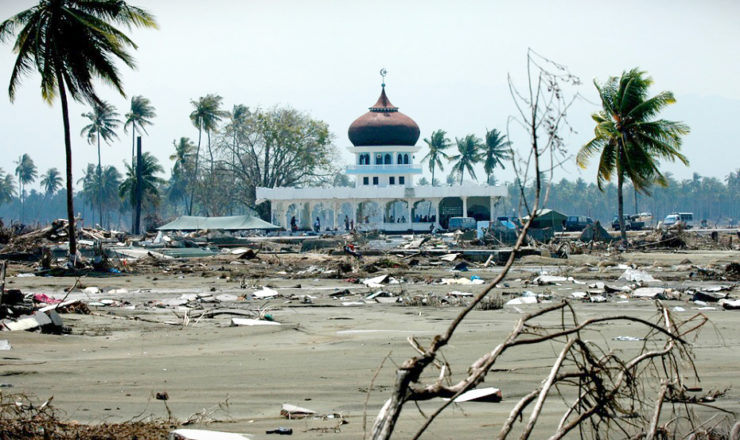 The devastating 9.1-magnitude earthquake that occurred December 26, 2004 in the Indian Ocean ⓒ shutterstock

The devastating 9.1-magnitude earthquake that occurred December 26, 2004 in the Indian Ocean triggered a tsunami that rose up to 30 meters, devastating many areas in Asia and Africa (www.bmkg.go.id). It was the third-biggest earthquake ever registered on a seismograph and at eight-to-ten minutes had the longest duration in history. More than 280,000 people died in 14 different countries.

Aceh Province in Indonesia, where the epicenter was located, was worst affected by this disaster. There was no early warning system and the disaster risk management was poor. People in Aceh Province had no adequate knowledge of tsunamis until then. Thousands of buildings in Aceh were demolished and more than 170,000 people were affected, while the actual epicenter location, Simeuleu Island, had only 7 victims out of a total of 78,000 people (www.bmkg.go.id).

It is said that Smong (meaning chaos during natural disaster in the Devayan language), communicated through poem and song, protected the people of Simeulue Island. Smong is an early warning system, featuring disaster mitigation ideas that were generally told as a lullaby for children and sung at wedding parties (10.1016/j.proenv.2014.03.070). It consists of five verses, as follows:

The lyrics have two meanings — denotation and connotation. The first to fourth stanzas are denotation while the rest is connotation. This story was reiterated in each generation as it held a significant meaning to share the knowledge to all Simeulueans in order to protect themselves from the tsunami. The second stanza explains the natural signs and earthquake before the village disappears. It suggests people find higher ground to protect themselves from the disaster that would drown the land. The third stanza explains that it was called Smong and that the story should be evoked and passed on to the succeeding generations.

The last stanza describes the Smong as a natural entity that should be taken in a positive way. It suggests accepting it and keeping yourselves safe with it. The response towards it must be taken prudently.

In this way, the Simeuluean people communicated about natural disasters through folklore before the terminology of the tsunami was discovered. It not only saved the lives of many people but also helped people to take decisions rationally during times of disaster.