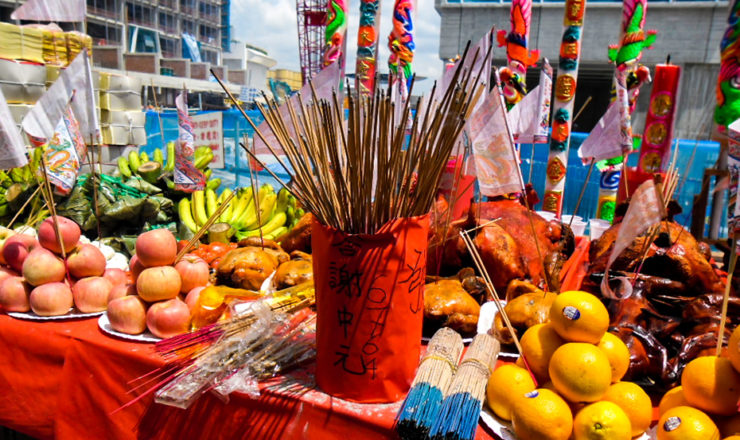 The seventh month of the lunar calendar is regarded as a month in which the gates of heaven and hell are opened so that ghosts and spirits, including deceased ancestors, can come back to visit the living in China and other Asian countries with Chinese migrants, such as Singapore, Taiwan, Hong Kong, Malaysia, and Indonesia. The fifteenth day of the month is called Zhongyuan Jie (中元節) in China, Baekjung (百中) in Korea, Obon (お盆) in Japan, and the Hungry Ghost Festival in other countries. The day’s story origin derives from an old Buddhist tale about Mu Lian.1.

Mu Lian, one of Buddha’s disciples, converted to Buddhism after losing his parents at a young age. As his longing for his mother grew stronger, his clairvoyance found her suffering from ravenous appetites that could not be satisfied in hell. He tried to offer food to his mother, but the food burned into ashes when it touched her mouth. Mu Lian asked Buddha about how he could relieve his mother’s suffering. When he prepared food offerings as directed by Buddha, his mother was saved from suffering. This tale developed into a Buddhist ritual2. to offer food for ancestors and was combined with Taoist tradition to celebrate Zhongyuan Jie. At Zhongyuan Jie, people hold memorial services for ancestors and other spirits.

In Singapore, people prepare ritualistic food offerings and burn incense and joss paper in front of their apartments, stores, or companies for their ancestors’ visiting spirits. They murmur prayers while burning joss paper and go round in a circle with nobody else getting inside. Some even burn miniature paper houses, cars, and smartphones. Unlike most countries that hold traditional rites, the city-state celebrates Zhongyuan Jie in a more modern way. A getai3. is held at vacant lots or parking lots during the Ghost Festival. Getai performances were usually of Chinese operas or puppet shows in the past. Now they have evolved into various forms, including songs, dances, and stand-up comedy. A getai performance usually begins with jokes and comedy, using various languages such as Mandarin, Hokkien (a Southern Min Chinese dialect originating from Fujian Province), English, Malay, and Indian. The first row is left empty so that the spirits can sit and enjoy the performance comfortably. Although getai performances have been modernized, all the songs and dances serve the same purpose of consoling dead souls  and pleasing the king of the underworld.

During the festival, evil spirits come out with ancestral spirits. There are taboos to protect innocent people from evil spirits, such as going home late and swimming so as not to be pulled by water ghosts. People are also recommended not doing new things, like a trip, wedding, or risky movements, to avoid curses from evil spirits. They should spend their time in a more religious and controlled way than usual.

Singaporean authorities have made various social and cultural efforts to preserve the Ghost Festival and pass it on to future generations. Singapore’s Taoist and Buddhist Federations have encouraged devotees to burn offerings responsibly as Nanyang Technological University scientists found that concentrations of small pollutant particles increased by 60 percent during the Hungry Ghost Festival, saying that it is not a case of “the more the merrier” since it is sincerity that counts. Singapore has grown based on coexistence and harmony among various peoples. As such, it emphasizes respect for different cultures even when enjoying a festival, highlighting that such celebrations should not be limited to a certain group. Collective efforts at all levels of society have made the Hungry Ghost Festival open to all people in Singapore. This festival provides lessons on how to discuss and resolve social issues and ethnic conflicts amid the progress of globalization.