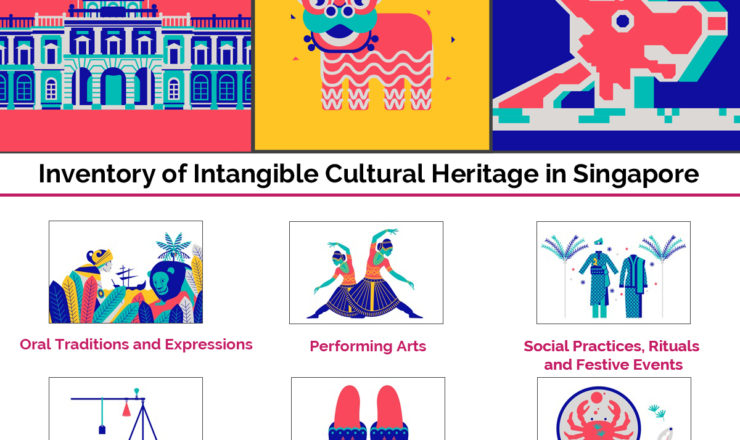 Singapore unveiled its first master plan for the heritage and museum sector, Our SG Heritage Plan (2018-2022), in April 2018, and as part of the master plan, the National Heritage Board of Singapore (NHB) also launched its first national inventory for intangible cultural heritage (ICH) on 7 April 2018.

The inventory seeks to showcase the diverse ICH elements present and practiced in multicultural Singapore. These ICH elements comprise the traditions, rituals, crafts, expressions, knowledge, and skills that are practiced and passed on from generation to generation by ICH practitioners. The elements are grouped according to the following six categories:

Oral Traditions and Expressions
Traditions such as folk tales and storytelling that use language to transmit knowledge and express our cultural values.
Performing Arts
Traditional cultural and artistic expressions in dance, music, and theater that are specific to major ethnic groups in Singapore.
Social Practices, Rituals and Festive Events
Social customs, including religious and non-religious rituals, ceremonies, and festivals that make up Singapore’s cultural diversity.
Knowledge and Practices Concerning Nature and Universe
Knowledge, skills, practices, and representations developed by communities through interactions and/or involving the natural environment.
Traditional Craftsmanship
Traditional crafts and ways of making products by hand using knowledge and skills passed down through the generations.
Food Heritage
Food cultures and cuisines of the major ethnic groups in Singapore that include ingredients, recipes, and preparatory methods.

Singapore’s inventory for ICH includes a sixth category on “Food Heritage” because NHB recognizes that food is an important part of Singapore’s shared cultural heritage and because of the strong support for food heritage from heritage experts, practitioners and members of the public who participated in NHB’s focus group discussions and public consultations.

The ICH elements featured in the inventory are derived from the findings from an ongoing nationwide ICH survey scheduled to be completed by the end 2018. Both the ICH survey and inventory were developed in consultation with a heritage advisory panel composed of heritage experts and academics.

Through the inventory, NHB hopes to document and make available more information on Singapore’s ICH and promote a greater public understanding and appreciation of the country’s diverse cultures, traditions, and practices.

The inventory for ICH will evolve as Singapore’s ICH elements are dynamic and constantly updated and/or re-interpreted by practitioners and source communities in response to changes in their environments and lifestyles. It will also be a growing inventory as NHB will continue to work with communities and add more ICH elements and more research and documentation materials over time.

As a part of its efforts to grow the inventory, NHB is seeking suggestions of other ICH elements to be included as well as contributions of photographs, videos, and other heritage resources relating to existing ICH elements from heritage experts, NGOs, community groups, and members of the public.

For more information on the inventory, please visit: www.roots.sg/ICH.