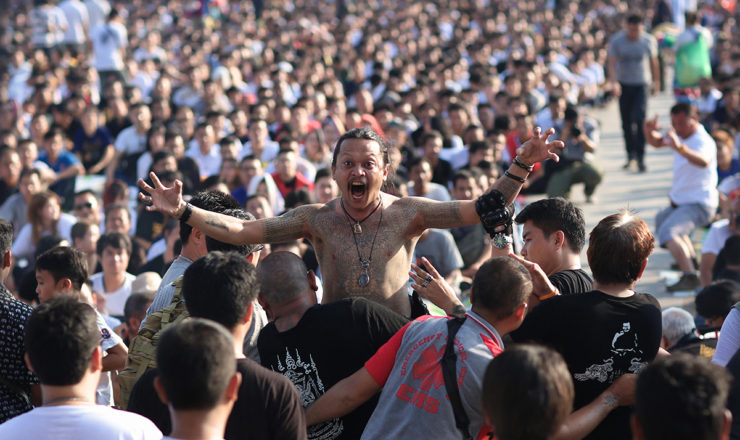 Ceremony participant believed to be possessed by his tiger tattoo. © Eva Rapoport

For hundreds of years, Thai people drew images of animals, Khom scripts, and mystic diagrams (yantra) on their skin, believing that these would protect them against misfortunes. Sacred tattoos, known as sak yant (sak meaning “to tap” or “to tattoo”; yant meaning “sacred design or geometry”), were originally worn by warriors before a battle, but now they are enjoyed by the general public like a lucky charm. Sak yant is traditionally rendered using a bamboo needle by tattoo masters (ajarns) among Buddhist monks. But the magical power of such tattoos is not permanent, so it is believed they should be recharged on a regular basis. The popularity of sak yant led to an annual tattoo festival in March in Wat Bang Phra, a Buddhist temple/monastery about fifty kilometers west from Bangkok.

Before dawn people start gathering at the vast monastery compound. They sit on the ground facing the altar with the statue of Luang Phor Pern, a famous meditation monk renowned for his mastery of sacred tattoos. Temple monks begin a ceremony called Sak Yant Wai Kru in the morning though prior to this, peculiar occurrences take place. Some of the tattoo-bearers become possessed by their own images: of a warrior, an old man, a tiger, a crocodile, or Hanuman, a monkey demigod of Hindu mythology. All of a sudden they jump up yelling or roaring like animals and run toward the altar. Frenetic in their trance, they are held above the ground, their ears are rubbed or blown, which swiftly brings them back to their normal consciousness, then they do wai (Thai gesture of reverence; a bow with the palms pressed together), and peacefully return to their seats.

The tradition of writing protective tattoos has a long history in Southeast Asia. Sak yant, sacred geometrical designs tattooed by revered monks, in particular, is an old social practice that continuously reaffirms the heritage of Thailand.