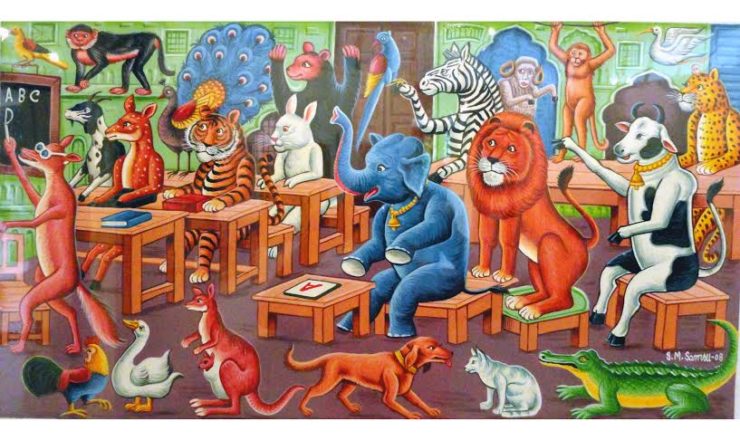 Introducing rickshaws, three-wheeled non-motorized passenger carts, to the urban areas of Bangladesh in the 1940s led to a new art form, rickshaw painting.

Rickshaw painters learn their craftsmanship from mentors at workshops. Their passion is evident in the painted backboards and rear side panels, hood cut-outs, and flower-filled brass vases. But, the most interesting aspect of rickshaw painting is the colorful rectangular tin sheet used at the rear of rickshaws, because it represents the painter’s choice and designing skill.

The tin sheet on the back was once decorated only with portraits of famous movie stars. However, in the late 1970s, the government imposed a ban on portraying these portraits, so the artists introduced animals mimicking the activities of the movie stars in films. While the government lifted the ban in the late 1980s, the artists continue with experimentation that include animals, flowers, and other motifs.

Though the rickshaw painters have no formal academic knowledge, they modify the subjects and compositions according to changes in time and sociopolitical conditions. As a result, their works combine folkloric, movie, political, and commercial imagery, depicting their heart’s desires as well as their religious devotion.

Bangla Academy, a state-run research institute in Bangladesh, has prepared a nomination file on behalf of the government of Bangladesh to inscribe Dhaka’s rickshaw and rickshaw painting on the UNESCO Representative List.