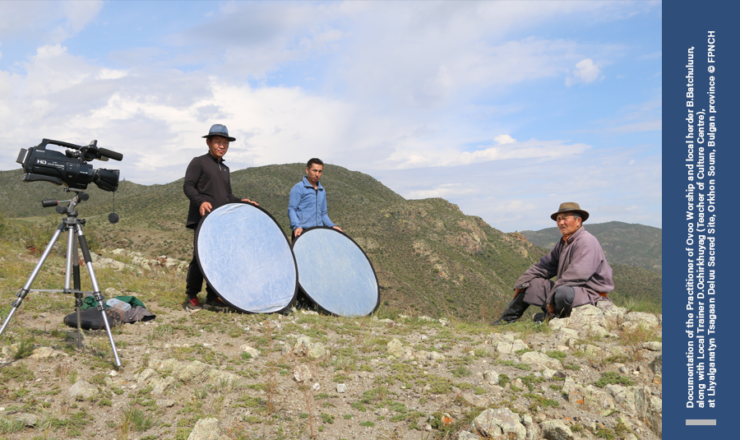 Key expeditions were organized in Mongolia as part of the International Assistance (IA) project ‘Supporting natural and cultural sustainability through the revitalization and transmission of the traditional practices of worshipping the sacred sites in Mongolia’. With representatives of local organizations and living heritage experts, those expeditions were conducted to identify the sacred sites worshipped by communities. Inscribed in 2017 on the Urgent Safeguarding List (USL), the safeguarding of the element ‘Mongolian traditional practices of worshipping the sacred sites was strengthened throughout the duration of this project.

Mongolian practices of worshipping sacred sites embody the harmony of nomadic lifestyle with nature. By celebrating deities linked to the biodiversity of those sites, those practices also build of sense of community amongst people. However, those practices were weakened during the communist regime in Mongolia and despite the involvement of the Mongolian government and the enthusiasm of locals, several threats remain. As a result, the request for International Assistance was approved for a thirty-months project with the aim of raising awareness amongst the broader population of the country and especially youth.

The project successfully developed activities and has shared the outputs and results with the Living Heritage Entity. The fact that some of those sacred sites are inscribed on the World Heritage Convention lists has created favorable conditions to conduct worshipping practices in restored and protected sites.

Furthermore, the team members of the expeditions exchanged with practitioners on site, religious representatives of local monasteries, herdsmen, and documented those meetings with high-quality visuals, one of which pictured here. A digital inventory of worshipping practices was established, and further informative materials were created and dispatched, which were proven useful during seminars and activities.

Documentary films and TV series were produced, and UNESCO will soon be publishing those videos in order to reach a wider audience and encourage the safeguarding of such living heritage practices.