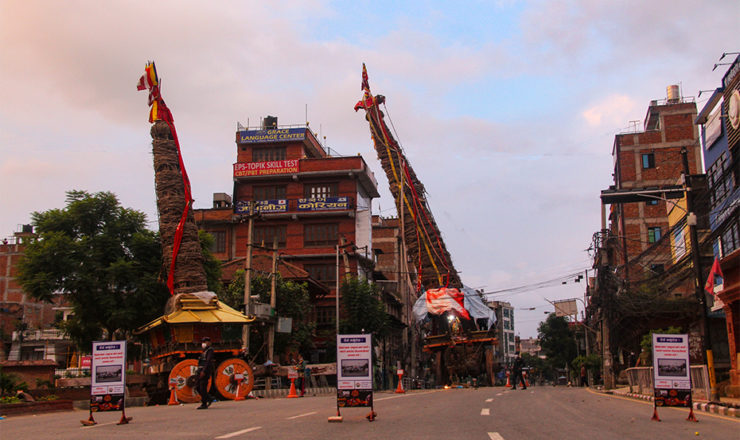 Residents of Kathmandu Valley, for the first time, saw temples being closed and even barred from entering the sites due to Covid-19. Most of the festivals were cancelled, which didn’t even happen even after the devastating earthquake of 2015. Only the most important rituals were performed behind closed doors. Many festivals and rituals were limited to just the formality rituals and forgiveness rituals. Instead of huge crowds, there were empty squares and closed temple doors.

For the cities, towns, and villages within the Valley known for festivals, processions, and rituals throughout the year, Covid-19 proved to be cruel. The prolonged uncertainty has prompted communities and individuals to take alternatives for continuity of ICH with new normality.

The biggest festival of Patan city, a chariot Karunayama procession, saw a violent clash between locals and police on 3 September 2020. The sight of chariot with God inside was stranded on the roadside for several months and made locals take the decision to start pulling it. After this event, the consultation between local government, chief district officer and community members was held. A few days later, the symbolic procession and forgiveness rituals were performed. The strict measures for security and necessary precautions against Covid-19 were taken. Only limited numbers of people could pull the chariot and play musical instruments with masks and face shields.

Many rituals, which were supposed to take place without the masses attending, continued in many places of Kathmandu Valley. One of the rituals was restoration of important scriptures of Mahayana Buddhism—Pragyaparmita in Buddhist Monastery of Kwa Baha/ Hiranyavarna Mahavihara in Patan. Pragyaparmita translates as “Perfection of Wisdom.” The one in this monastery is written in gold and contains eighty thousand stanzas that were written in 1224 CE. This restoration used to take place for a month every three years, which had one leap year according to the lunar calendar. This year with leap month, the Buddhists priests were seen working on it wearing masks behind the closed door of the monastery.

Similarly, the annual festival of Pachali Bhairav in Kathmandu was held from 17 to 21 October. The community members took extra steps to adjust to new normal with full precautions against Covid-19. The people who were carrying God Pachali Bhairav in the form of big pot were seen wearing Personal Protective Element. This scene was spectacular.

Likewise, the town of Khokana in Kathmandu Valley also continued with their most important annual event Shikali Jatra from 19 to 23 October. The deities were with their traditional masks and attire, but the communities were with the mask to protect against the virus. This festival used to have huge crowds, but this year, only a limited number of people attended.

Another city in Bhaktapur also continued their important annual mask dance named Nava Durga that started on 24 October. To avoid the masses, all the rituals and dances were performed only in the square of the ancient Bhaktapur palace where limited people were allowed. Normally, this dance is performed in different places within city of Bhaktapur and nearby villages and towns, which would continue until June. But with pandemic, the continuation in other places is still uncertain.

People tend to organize festivals, continue rituals despite the warning from the health professionals and government. Many legends and tales tell the stories of rituals and festivals initiated in ancient time to ward off evil spirits, droughts, and pandemic. Many people still hold on to these beliefs in Kathmandu Valley.