REPfest: World Music Brought to Cambodia for the First Time 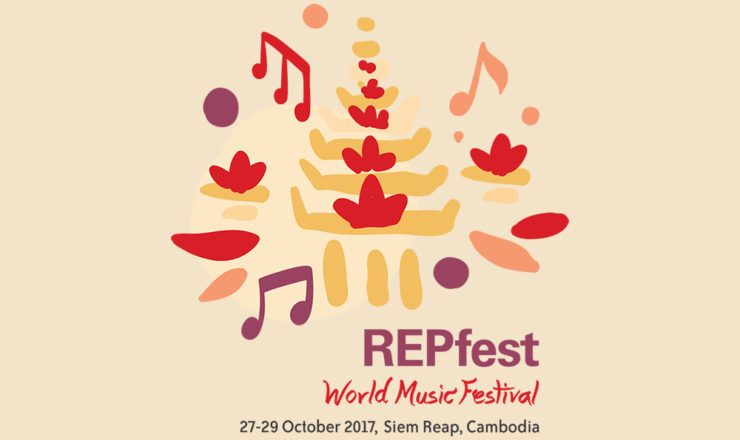 Cambodia recently hosted an international music festival, drawing artists from around Asia for three days of performances, workshops, and forums. Supported by the World Culture Open (WCO) and the Mekong Cultural Hub (MCH), REPfest was developed and presented by Cambodian Living Arts (CLA). The festival took place in Siem Reap, Cambodia, from 27 to 29 October 2017.

REPfest brought artists together from around Cambodia and other parts of Asia, with a focus on the music out of the Greater Mekong region, allowing them to share their experiences and skills, and helping to sow the seeds for future collaboration in the region. With artists from a range of styles and backgrounds, REPfest aimed to inspire those taking part to develop their music creatively, and to share it with new audiences. As well as showcases and performances, exchange and improvisation workshops were held to provide the participating artists rare opportunities of interaction. There were also public workshops where artists engaged with the audience on a more personal level. A public forum was held on the final day, through which the participating artists spoke about creating new music in their countries, discussing challenges and opportunities for collaboration in the region.

The following (group of) artists gathered in REPfest: Medhā, Kohei Nishikawa, Champasak Shadow Theater, Law Ka Nat, Đông Kinh Cổ Nhạc, and Yaksao. Medhā is a group of female Cambodian drummers, perceived as a new model of traditional arts to the current generation. Born in 1953, Kohei Nishikawa is a Japanese musician trained in both classical and traditional music, who started his career as principal flutist of the Osaka Philharmonic Orchestra. Coming from Southern Laos and reviving the cultural tradition of shadow puppetry, the Champasak Shadow Theater is composed of fourteen people including artists, musicians, vocalists, comedians, and puppeteers. Representing Myanmar, Law Ka Nat is composed of a composer and six instrumentalists, making new music styles and compositions through traditional music. Đông Kinh Cổ Nhạc is a Vietnamese group of artists, traditional singers, and musicians performing to share the values of Vietnamese cultural heritage. Formed through a workshop, Yaksao is a new Cambodian musical group creating music based on their traditional roots.

REPfest was a part of a series of music festivals in Asia that started on 24 September and will end on 11 November. Aside from Cambodia, China and South Korea are also host countries. “It truly is an exciting collaboration. We have grown from two countries last year to three Asian nations  today, and we look forward to having more countries and regions join in, and inspiring more  international collaborations in the years to come,” says Kseniya Tsoy, from Connect&Collaborate at  World Culture Open.