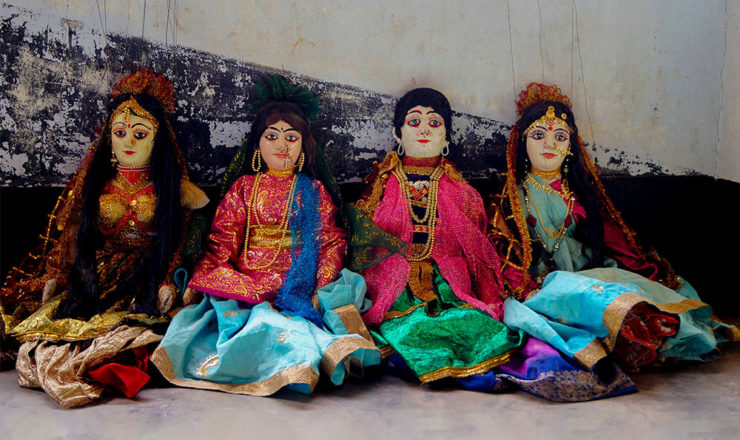 Putul against a wall between showings © Banglanatak dot com

A puppet festival is a public-driven performance of tradition in Muragachha Colony in the Nadia District of West Bengal, about 120 km from Kolkata. It is organized by the local people under the aegis of Banglanatak dot com, a social welfare organization. Muragachha Colony, and its neighboring village, Borboria, are home to puppeteer families who have not only plied their craft across Bengal but also traveled to many fairs and festivals across India. Masters in string puppetry, or suto putul as it is known in Bengal, they are trying their best to preserve this traditional folk theater, often referred to as putul natok or putul nach in Bengal, against stiff competition with electronic media and modern forms of amusement.

Most puppeteers in these areas trace their roots to Khulna and Barishal in Bangladesh; their practice of string puppetry originated from the Kathputli of Rajasthan. According to veteran puppeteers, however, they are facing challenges as the younger generation is not keen on pursuing a life of puppetry—typically a family-driven profession—due to dwindling income.

Conventionally, the puppeteers travel all over the Bengal region between Durga Puja at the beginning of summer, performing at various fairs, festivals, and household functions with their portable stage and dolls. A puppet head is usually made of sholapith, a mold-able milky-white spongy plant matter, which is then painted with facial expressions that require the delicate touch of a master. Designing and tailoring the colorful and intricate puppet garments are also important.

Banglanatak dot com has been working with the puppeteers for the past few years, training them to create a script and a more contemporary, more relevant stagecraft; their intervention is chiefly to provide support to revitalize Bengali puppetry in a workshop setting. This activity helps not only to discover the cultural dimensions of entertainment but also to understand the ways in which puppetry can be a tool to disseminate cultural knowledge. A writer, narrator, musicians, puppeteers, and skillful assistants work together as a team to prepare the puppet festival.

With support from the West Bengal Khadi and Village Industries Board (WBKVIB) and Rural Craft Cultural Hub—an initiative of West Bengal government’s Department of Micro, Small & Medium Enterprise & Textiles (MSME&T)—in association with UNESCO, the puppet festival, Putul Naach Mela, was held for the first time from 15 to 17 December 2017 at Muragachha Colony Primary School to spread awareness about the suto putul of Bengal.