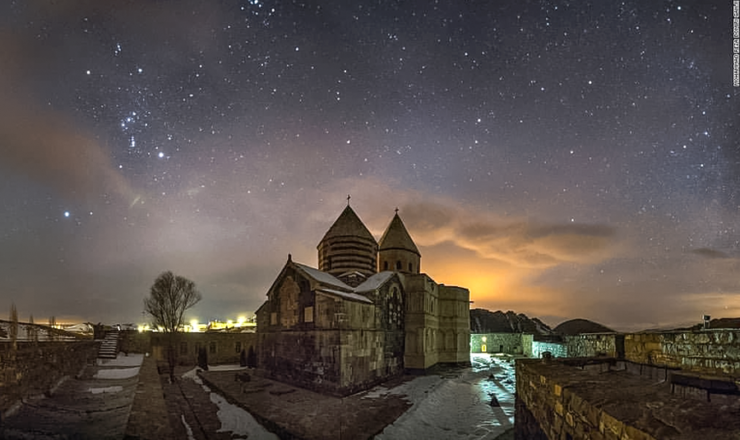 On 17 December 2020, the rite and pilgrimage to St. Thaddeus Church were added to the Representative List of intangible cultural heritage with a joint nomination file with Armenia and Iran. It marks Iran’s sixteenth heritage element to be registered on UNESCO’s lists. The Pilgrimage to St. Thaddeus is a religious rite held in West Azerbaijan, Iran, at the Church of the Holy Qara (Black Church). Every year, thousands of Armenians from all over the world come to this historic site to perform this ritual.

Qara Church is one of the world’s oldest churches and one of the most significant Armenian churches. According to some scholars, it is the world’s first Christian structure, and it is located 20 kilometers northeast of Chaldoran city, next to a village of the same name. Qara means ‘black’ in Azeri, and the name comes from the fact that a portion of the church is black. The church’s main structure is made of black stones, which have been replaced with white stones following the reconstruction of some of the stones.

The Church of Thaddeus, along with the Dzordzor Chapel and St. Stepanos, was added to the World Heritage List as a collection on July 7, 2008.

This ceremony commemorates the martyrdom of Thaddeus, one of Christianity’s first apostles, and Santukhd, the first female Christian martyr.

Thaddeus, also known as Tataeus, was one of Christ’s apostles who visited Armenia in the year forty AD and preached Christianity. Many groups converted to Christianity because of his preaching, including Armenia’s King Sanatrok and his daughter Santukhd. However, the king later regretted it and became opposed to the new religion, ordering the assassination of Thaddeus, Sandakht (his daughter), and others.

The history of this ritual dates back to 1954, and it has been organized every year in St. Thaddeus Church by Armenians for 66 years with the presence of Armenians and Christians from Iran, Armenia, and other countries around the world. In addition to the Armenians, Assyrian families and some Catholic families also attended the ceremony.

The ceremony is a social and cultural event that incorporates religious, ethnic, and traditional motives. Every year in July, rituals, and pilgrimages to St. Thaddeus Church (Qara Church) are held. During these three days, ceremonies such as infant, child, and adolescent baptisms, weddings, candle lighting, and church bell ringing are held inside the church and in the surrounding area.