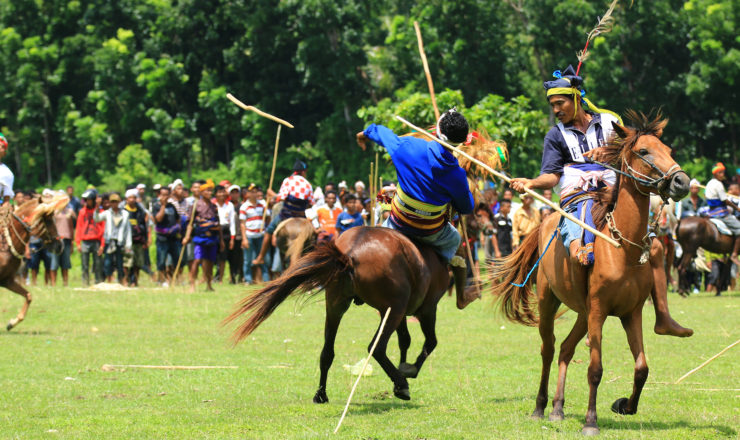 Pasola is a Sumba Tribe horse riding contest from Sumba Island of East Nusa Tenggara, Indonesia. It is followed by Marapu groups which is the local religion of Sumba community. This festive is a peak of Nyale tradition where they plead for successful harvest as well as a thankful ceremony to ancestors. The celebration of Pasola in Marapu’s belief is considered to maintain the harmony between ancestral and humankind. They believe that ancestors can give the blessing and the prosperity for them and bring harmony.

The word of Pasola comes from “sola” or “hola”, which means Javelin woods. The affix ‘pa’ when added, the meaning changes to be wooden javelin game. So, pasola or pahola means a game throwing the wooden javelin while fast-riding horse between two opposing groups. The game of pasola is held on four settlements in West Sumba Region i.e. Kodi, Lamboya, Wonokaka, and Gaura. This game is performed between Februarys to March every year in alternation.

The Process of Ceremony

Pasola is commenced by Nyale tradition. Nyale tradition is a thanksgiving ceremony for pleasant harvest season and plenty of Eunice Fucata (a species of sea worm) on the coast is the indication innate in the festival. It is held at a full moon when the Nyale (sea worm in Sumba Language) comes out to the seashore. The ethnic chief called Rato will predict the moment once the sea worms come out when the sun is rising in the morning. When the Rato finds the first sea worm, its shape and color is examined. If the worm is fat, healthy, and colorful, it is predicted that they will influence the benefit and gain successful harvest that year. It also means that Pasola Festival can be performed. In contrast, if Nyale is thin and unhealthy, it is the believed that misfortune will occur and Pasola is forbidden to be organized.

The arena of Pasola Festival undertakes in large terrain. It consists of two groups and each group has more than 100 spear-armed knights. The spear is created from dull-tipped wood with diameter of 1.5 cm. This game can harm the victims even though the spear is dull. According to the Marapu’s faith, if there is a victim during the contest, it is believed that the rule is broken or mistake has been made so ancestors will punish them. During the Pasola, some knights will be injured and the blood will come out from his body. This blood is opined as valuable for soil fertility and successful harvest. If death occurs during the Pasola, it is a signal that there was a custom violation carried out by society on the Pasola arena previously.

Pasola has become a service way and loyal acclamation to ancestors and a core of Marapu. It can be a liaison of brotherhood between two opposing groups and the community. It is a thanksgiving manifestation and happy expression of inhabitant due to abundance harvest. Today, Pasola is a milestone of Sumba tourism development because this culture attraction has been appealing number of domestic and foreign tourists.