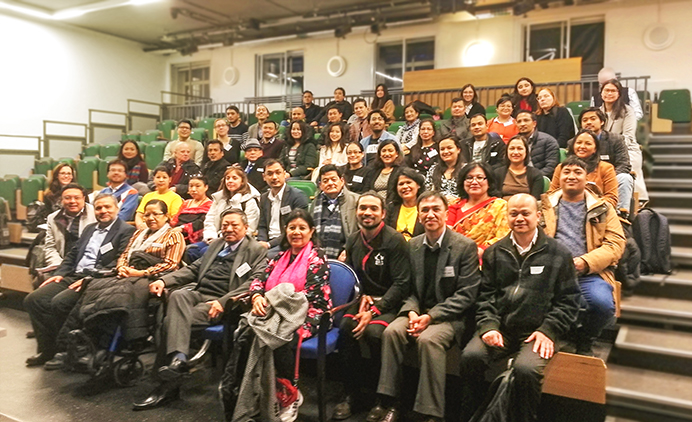 Pasa Puchah Guthi UK (PPGUK) London held the Guthi Conference 2020 with theme “Newah Culture and Heritage” on 1 February 2020. It was jointly organized with South Asia Institute, SOAS (School of Oriental and African Studies) University of London. PPGUK was founded in 2000 by the Nepalese living in UK with aim to have a connection with the Nepalese diaspora and to give stability to Newah culture in UK. Since then, PPGUK has been organizing several networking events along with the programs to give continuity to the Newah culture in UK and also to pass it on to the younger generations.

The conference stated with the welcome note and introduction to the conference by Mr Sanyukta Shrestha, president of PPGUK London. The keynote speaker of the event was Dr Shaphalya Amatya, ex-Director General of Department of Archaeology, Government of Nepal. He gave a presentation on Nepali architecture: history and some of its unique features.

After the keynote speaker there were three sessions where the presenters presented virtually or in person. The first session, which was chaired by Dr. Stefanie Lotter from SOAS University, had the virtual presentations from Kathmandu and San Diego. From Kathmandu Mr. Alok Siddhi Tuladhar and Ms. Binita Magaiya presented the current reconstruction of heritage process in the Kathmandu Valley and the people’s movement towards heritage conservation. After which, a recorded video presentation by Mr. Ananta Baidya form San Diego on technical aspects regarding the reconstruction of monuments after the 2015 earthquake in Kathmandu Valley was shown.

The second session was chaired by Prof. David Gellner from Oxford University. Prof. Michael Hutt and Dr. Stefanie Lotter from SOAS University presented their ongoing project on the repository of the materials related to the earthquake of 2015 in Nepal, which is named After the Earth’s Violent Sway. Dr. Lotter also made an interesting presentation on her ongoing research on how people respond towards disasters like earthquakes through the medium of tattoos. The last presentation of the second session was done by Dr. Monalisa Maharjan from the UNESCO Chair for Intangible Cultural Heritage and traditional know-how, regarding the policies and practices in an international context and in Nepal.

The last session of the conference was chaired by Mr. Ojesh Singh, president of PPGUK Board of Trustee. The first presenter of the session Dr. Bal Gopal Shrestha from Oxford University gave a brief overview of Newah culture and heritage. Mr. Shobhit Shakya form Tallinn University of Technology, presented on the traditional Newha Guthi institution in heritage conservation and its need for reformation to meet the challenges ahead. Ms. Marilena Frisone, the final presenter of the session from SOAS Nepal Bhasha Club presented on practices of languages and cultural revitalization among Newar migrants in London.

The conference closed with concluding remarks by Dr. Sachetan Tuladhar, past president of PPGUK London, along with a thank you note by Mr. Anil Maharjan, joint secretary of PPGUK London.

The conference was attended not only by the researchers and experts but also people from different walks of life. The event was successful on giving an overview of the heritage in Nepal and abroad to the Nepalese diaspora living in UK.