Pambabatok: A Tattooing Technique of the Butbut Tribe in the Philippines 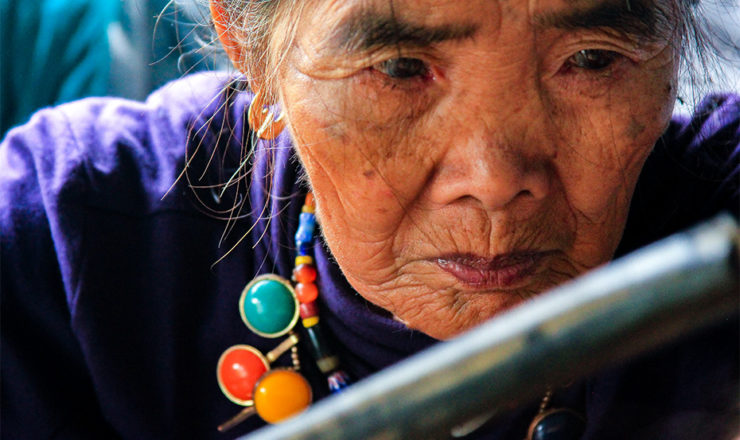 Whang-od Oggay, a 102-year-old woman from a mountain tribe in the Philippines, is a living instrument in the continuity of pambabatok, an endangered ancient tattooing technique that chiefly constitutes hand-tapping to create figures on the skin. Believed to be the oldest tattoo artist and the last linkage of her tribe to pambabatok, Whang-od became famous in the internationally when she was featured by Dr. Lars Krutak, an American anthropologist who was the host of Discovery Channel’s Tattoo Hunter in 2009. Pambabatok is argued to be at least a thousand year old intangible cultural heritage (ICH) element.

Whang-od is called a mambabatok, derived from the root word batok that means “to hit”. For her hand-tapping tools, she uses a lemon thorn needle or siit that is attached to the end of a small bamboo stick and another shorter stick for tapping the thorn into the skin. The ink she uses is a mixture of water and soot. Pambabatok, compared to other conventional tattooing techniques, is relatively painful. It is done by applying rhythmic and repetitive pricks on the skin using her traditional hand tools. During my personal visit in Buscalan in 2015 to see Whang-od, I noticed that she will begin tattooing the tourists in the first light of dawn and she will only finish at dusk. There would be days when almost fifty people lined up to get tattooed by her. Sometimes she could not eat because of the blood and flesh that she had been tapping all day.

The traditional designs of her tattoos come from the symbols of nature and geometric figures significant to the Butbut tribe, an indigenous community living in the village of Buscalan, nestled in the lush terraces of the Cordillera Mountains of Kalinga, a province in the northern part of the Philippines. In the olden days, the tribe was known for their headhunting culture. Warriors battled for land and honor to protect their tribe and village. They would cut off their enemies’ heads and as a reward they would be inked with magnificent tattoos that exude valiance when they return triumphantly to their village. The females also received tattoos as a rite of passage and symbol of beauty. Their tattoos transform girls into women; the women thereafter become eligible for marriage and bearing children. The more tattoos women had, the more attractive they were to the men in the village. Some elders believed that the tattoos could also cure infertility and various illnesses. The culture of headhunting and combat slowly disappeared due to modernization and religious influences. Consequently, protecting the vitality of their ritualistic and performance-based practices never occurred to be a social agenda.

When a journalist named Grace, niece of Whang-od, realized that the tattooing heritage will be completely lost when her aunt dies, the transmission of pambabatok. Recently, the National Commission for Culture and the Arts (NCCA) awarder her with the 2018 Dangal ng Haraya Award for Intangible Cultural Heritage to honor her contribution in raising awareness about the Butbut tribe and safeguarding an ICH element of the Philippines.