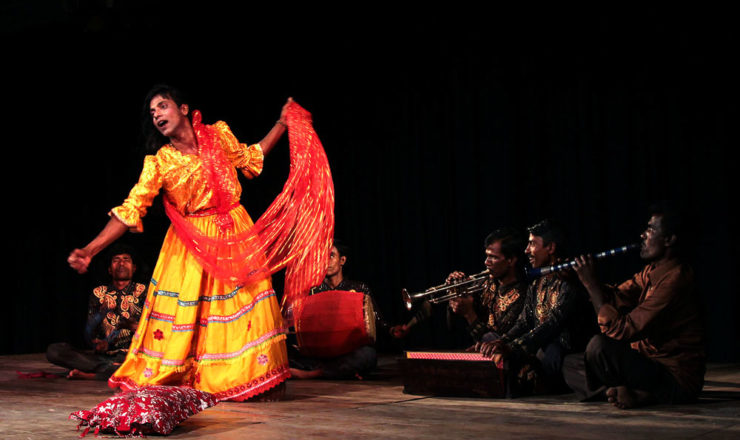 Performed by singers in rural areas of the greater Mymensigh region and greater Dhaka region, Pala Gaan is a theatrical experimentation using a combination of indigenous references and timely rhetoric. Typically the shows begin with Guru Bandana (an artistic expression of showing respect to God and then to the mentor from whom the Bayati learned the performance). It is followed by Ashon Bandana (an artistic expression that pays tribute to the audience).

The lead singer of Pala Gaan is called bayati, who narrates stories, tales, and legends through music incorporating dance and dialogues. After a short musical prelude, the bayati starts narrating the tale. A group of choristers helps the bayati in the entire performance. During the narration, the bayati enacts different characters such as king, queen, prince, rural maiden, ghost, and animal using limited props. Pillow and scarf are typically seen as the props used by the bayati. Dohar, a member of the choir, helps the bayati by giving cues during the act. In an open stage performance, the bayati singer takes the center of the stage while the choir sits aside.

In Pala Gaan, the narrative is thickened by improvisation to make it relatable, giving the audience a time to think through it. As a result, a tale may have multiple versions depending on the taste of who performs it. Though ancient texts are central to Pala Gaan narratives, serious issues such as love, position of women in a patriarchal society, discrimination, and oppression can also be addressed. And when a show is held for an urban audience, urban issues, even the ones taken from global politics, can also be artistically twisted. Charming narrations and realistic portrayals of characters are special features of Pala Gaan, enriching the use of dialects and folk rhythms.