One Asia with Rope, Drawing the Future of Tugging Rituals and Games Together 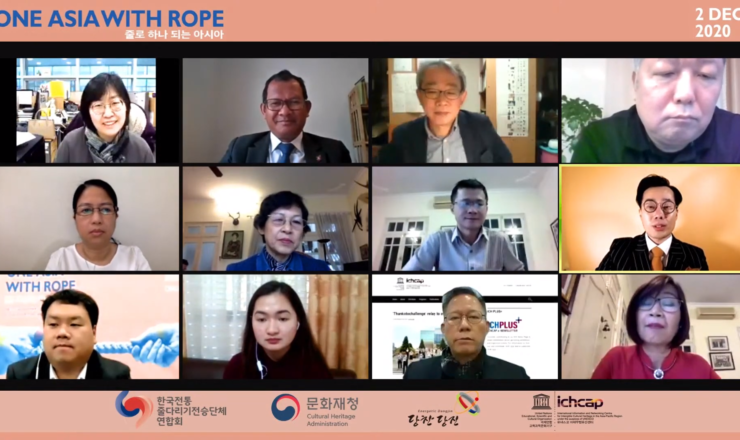 On 2 December 2015, ‘Tugging Rituals and Games’ was inscribed on the Representative List of the Intangible Cultural Heritage of Humanity as a multinational nomination with the Republic of Korea, Cambodia, the Philippines, and Vietnam. To mark the fifth-year anniversary of the inscription, the online event, “One Asia with Rope,” was held. The event was organized by the Federation of Korean Traditional Tugging Rituals and Games Transmission Organizations (hereafter the Federation) and sponsored by the Cultural Heritage Administration (hereafter CHA), ICHCAP, and Dangjin City. The event was initially planned offline, including an international symposium, demonstration of tugging rituals and games among four countries, and communities’ exchange programs. Unfortunately, COVID-19 obstructed, making it into an online one.

Live-streamed via CHA’s and ICHCAP’s YouTube channels, Ms. CHUNG Jae-suk, Administrator of the Cultural Heritage Administration, Mr. KEUM Gi Hyung, Director-General of ICHCAP, Mr. Siyonn Sophearith, Director General of Techniques for Cultural Affairs of Cambodia, Dr. Le Thi Minh Ly, Vice Chairperson of Vietnam Association of Cultural Heritage gave welcoming and congratulatory speeches on video. The four countries reported their activities over the last five years since the inscription. In particular, Ms. Renee Talavera, Head of Cultural Communities and Traditional Arts, NCCA, brought a video of the 2019 Korea-Philippines Exchange Program and shared the memories together. To sum up, the presentation on reminiscences and prospects on tugging rituals and games was given by HEO Yongho, a research professor at the Korea National University of Arts. Finally, with a special video screening about the current transmission status prepared by Vietnam, the event finished.

Initially, there were skeptical views on post-cooperation among countries due to physical restrictions, though, centering the Federation, the active engagements were unrolled for five years. Meanwhile, projects such as capacity-building workshops and demonstration events, producing educational and research materials, and overseas exchanges to Vietnam and the Philippines are continuously carried out in Korea.

Reflecting the title, “One Asia with Rope,” it was a time for looking back on the fifth anniversary of the inscription to confirm the possibility of various projects and activities, and it is expected that more active exchange activities of the four countries will be promoted in the future.