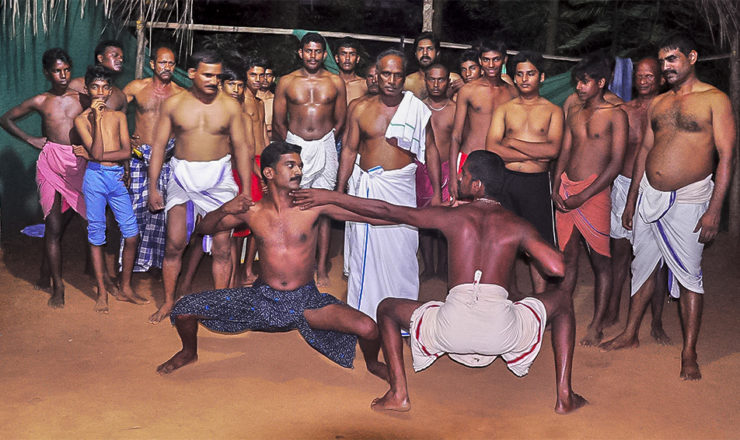 Onathallu, a martial art form of central Kerala, India, specifically on the banks of the River Nila, started as a form of entertainment for the upper castes, especially the rulers. Also known as kayyamkali, it means a martial exercise using hands. It is performed on festive occasions to show the strength of a group or village. It started as martial exercise for the soldiers who were part of the military troupe of a local landlord or king. In the old days, it was practiced in the courtyards of tharavadu (a big house where the landlords used to live). It then slowly started appearing in local festivals, adapting few steps and methods from the ancient martial art form called Kalari Payattu.

Only few artists are available to take the legacy forward; their attempts to do that bear positive results nonetheless, as young people have been inducted into training sessions. Since it requires mental and physical strength, only trained performers are allowed to participate in the show. It normally takes three to four years to become a good performer, depending on the speed and mental strength of the performer. During the initial years of the performers’ career, their opponents are from the same team or the asan (master) himself. They are allowed to select their opponents if they have enough maturity.

Chayikkaran (referee) controls the entire show. Traditionally, aged and experienced players take the role of the chayikkaran. The chayikkaran should know a few immediate tricks and treatment methods in case of emergencies during the show. Before they start the performance, the masters and chayikkarans bless the performers. These days, onathallu is performed only during the Onam season as a cultural show.