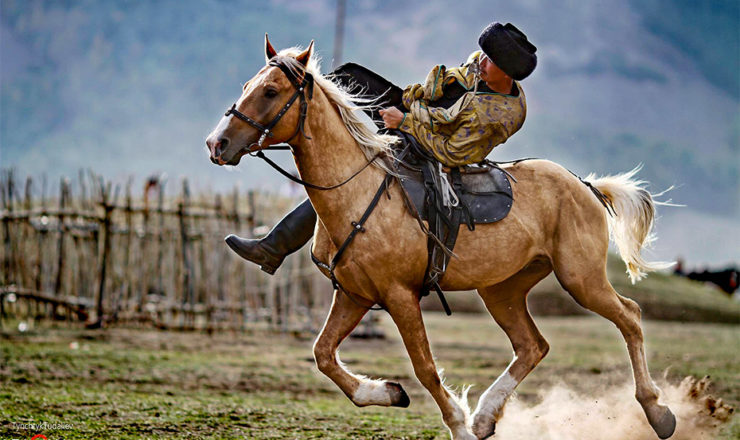 Prevalent in Kyrgyzstan, the horse symbolizes nomadic culture. The country’s folk literature reflects how the Kyrgyz people harmoniously live with the animal. For example, in Manas, the epic poem, the hero was inseparable from his horse, Ak-Kula, in every battle he fought. The deep association of the Kyrgyz with horses is embodied in nomadic horse games.

Occurring in summertime, nomadic horse games are usually played by men. These games are a depiction of spectacular skills and manliness. Men participating in these games demonstrate excellence in horse riding, prompt reaction, agility, and strength. There is a significant number of horse games in Kyrgyzstan collectively perceived as a traditional sport. Among the most important of these games is kok boru. Also known as ulak tartysh, it is a famous nomad horse game historically believed to train young men to be fearless. The game consists of two teams on horseback, where players have to throw a dead animal (ulak or sheep) to the opponent’s goal. The team with the most goals wins the game. Another game, at chabyish, is a long-distance horse-racing competition. Depending on the distance and age of horse, this game as classified as kunan chabysh, zhorgo salysh, or byshty zhorgo. Wrestling is also incorporated in nomadic horse games. Er enish is a good example of this. Requiring great stamina, this game consists of two horsemen who attempt to push each other off each other’s horse. The first to touch the ground loses.