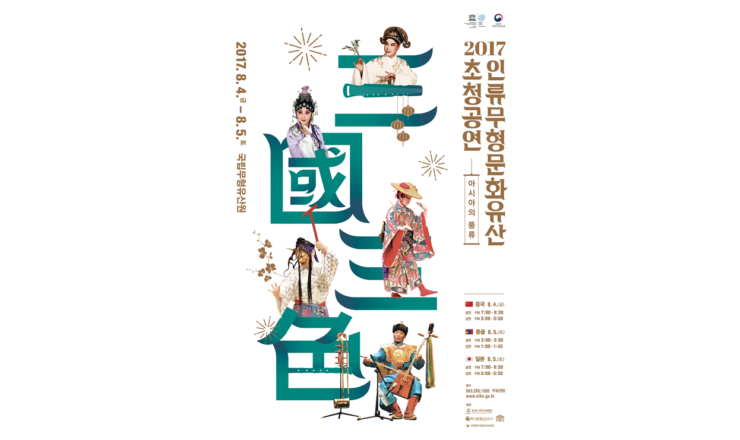 The National Intangible Heritage Center (NIHC) will present traditional performances on 4 and 5 August 2017 in Jeonju, Korea where the center is currently located. Dubbed as “Three Countries, Three Colors”, practitioners of Chinese, Mongolian, and Japanese ICH inscribed on the UNESCO Representative List of the Intangible Cultural Heritage of Humanity will grace the two-day event with performances divided into six sections, all raising the theme of “Performing Arts of Asia”.

On 4 August, the first day of the performances, traditional Chinese performance will welcome the audience. The performers will feature the following: the guqin, a major stringed instrument of China; nanyin, China’s musical performing art; and kunqu of Suzhou, which is one of the oldest forms of Chinese opera. Nanyin represents the musical art that reflects the culture of the Minnan people in the southeastern province of Fujian and overseas. A nanyin performance involves dongxiao (a bamboo flute) and pipa (a crooked-neck lute played horizontally). During the kunqu performance, a popular play “The Peony Pavilion” will be performed by renowned top-level actors in China, Li Gong-lu and Zhang Zhi-hong.

NIHC will invite Prof. Piao Enyu (China) of Hoseo University, Prof. Park So Hyun (Mongolia) of Yeungnam University, and Prof. Lee Ji Sun (Japan) of Sookmyung Women’s University to give special lectures prior to the opening of each performance. They will provide the audience with various stories and detailed information about traditional music of the three countries.