NIHC Holds From Hands to Hands: Handing Down Traditions 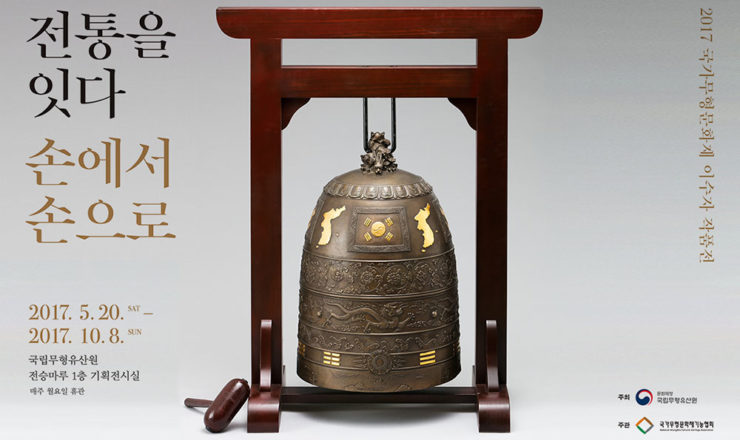 From Hands to Hands: Handing Down Traditions is being held until 8 October at the National Intangible Heritage Center in Jeonju, Korea. The exhibition features fifty traditional handicrafts by gifted graduates, all of whom have received rigorous training under a master designated by the government to maintain and pass on his or her knowledge and skills. The selected objects are representative of the nation’s cultural intangible heritage, which broadly includes ceramic, metal, wood, fiber, leather, and stone handicrafts.

Highlights include Ms. Sukmi Jo’s woven bamboo screen, yeom, which ignites poetic inspiration. Her translucent blind, designed to reduce heat and light, transforms into an astonishing piece of decorative artwork, revealing an intricate tortoiseshell pattern. Ms. Sunjeong Kim’s pair of silver and gold inlaid candlesticks have us pondering on the traditional wisdom reflected by her dragon design. Loosely coiled around her objects, both dragons appear to be floating in darkness toward an iridescent ball, either the moon or the sun, working as an elegant expression of a soul’s journey toward enlightenment.

From Hands to Hands is a brief journey through Korea’s rich traditional handicraft heritage, with the future very much in mind. Here we can connect the hands of mastery from the pre-Three Kingdoms period with those belonging to the current generation and marvel over these inherited, largely unbroken traditions.