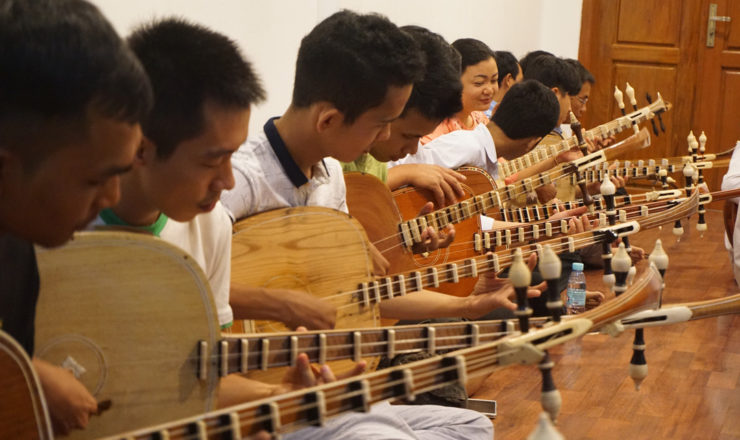 Thirty-three new elements have been added to the Representative List of the Intangible Cultural Heritage following the decisions adopted by the Intergovernmental Committee for the Safeguarding of the Intangible Cultural Heritage, which took place from 30 November to 2 December in Ethiopia. Of the new inscriptions, thirteen were from the Asia-Pacific region. In addition, one element from the Asia-Pacific region was inscribed to the list of ICH in need of urgent safeguarding.

List of Intangible Cultural Heritage in Need of Urgent Safeguarding

Chapei dang veng is a Cambodian musical tradition closely associated with the life, customs and beliefs of the Cambodian people. It features the chapei (a type of lute often played at cultural festivals) accompanied by singing. Song lyrics range from the educational and a type of social commentary, to satire while incorporating traditional poems, folk tales or Buddhist stories. The tradition has multiple functions within Cambodian communities, such as safeguarding traditional rituals; transmitting social, cultural, and religious knowledge and values; providing exposure to the old Khmer language; creating a space for social and political commentary; entertaining; connecting generations; and building social cohesion.

On Jeju Island, a community of women, some in their eighties, goes diving to gather shellfish for a living. The Jeju haenyeo (female divers) harvest up to seven hours a day, ninety days of the year, holding their breath for every ten-minute dive. Beforehand, prayers are said for safety and an abundant catch. The element is passed on in families, fishery cooperatives, and the Haenyeo School. The traditional practice advances women’s status in the community, represents the island’s identity, and promotes sustainability.

Originally a method of obtaining food, the practice of falconry has evolved over time to be more associated with nature conservation, cultural heritage, and social engagement within and among communities. Following their own set of traditions and ethical principles, falconers train, fly and breed birds of prey developing a bond with them and becoming their main source of protection. The practice, present in many countries around the world, may vary regarding certain aspects, for example the type of equipment used but the methods remain similar.

Making and sharing flatbread (lavash,katyrma, jupka, or yufka) in communities of Azerbaijan, Iran, Kazakhstan, Kyrgyzstan, and Turkey is a widely practised tradition. It usually involves family members, but in rural areas, neighbours may participate together. Baked in an oven, metal plate, or cauldron, the bread is shared at regular meals, weddings, births, funerals, and various holidays, particularly for prosperity. Passed on by participation and from master to apprentice, the practice expresses hospitality and solidarity and symbolizes common cultural roots, reinforcing community belonging.

Kuresi in Kazakhstan, a type of traditional wrestling, requires players to battle it out on foot to get the opponent’s shoulders on the ground. Where trainers previously coached boys to participate in local contests, these days kuresi is a national sport practiced by men and women in international competitions. Said to build tolerance, goodwill, and solidarity among communities, kuresi is transmitted in master classes and sports clubs.

Mangal Shobhajatra, a festival for the public, celebrates Pahela Baishakh (New Year’s Day) on April 14 and is organized by Dhaka University’s Faculty of Fine Art. The tradition began in 1989 when students, frustrated by living under military rule, wanted to bring the community hope for a better future. It features floats and masks symbolizing strength and peace to allow for progress. It promotes public solidarity and democracy.

Oshi palav (pilaf) is a traditional dish of communities in Tajikistan recognized as a part of their cultural heritage. The ‘King of Meals’ is based on a recipe using vegetables, rice, meat, and spices but up to two hundred varieties exist. Considered an inclusive practice that brings people of different backgrounds together, it is prepared to be enjoyed at regular mealtimes as well as social gatherings, celebrations, and rituals. Skills associated with the practice are passed on within families and cooking schools.

There is a saying in Uzbekistan that guests can only leave the host’s house after palov has been offered. Prepared with rice, meat, spices, and vegetables, the traditional dish is also enjoyed as a regular meal to celebrate special occasions, help those in need, or honor loved ones who have passed. Passed on from master to apprentice, within families, peer groups, and community-based institutions, the practice acts to strengthen social ties, promote solidarity, and is part of the community’s cultural identity.

Vietnam: Practices Related to the Mother Goddesses of Three Realms

To meet spiritual needs and everyday wishes and gain help in achieving good health and success, communities in Vietnam worship the Mother Goddesses of Three Realms: heaven, water, and mountains and forests. This includes the Mother of the World Lieu Hanh and other heroic spirits. The tradition involves daily worship, ceremonies, rituals and festivals. Passed on by bearers, such as temple priests, the activities provide a basis for social relations connecting the community and maintaining an aspect of its cultural heritage.

The ancient Chinese divided the sun’s annual circular motion into twenty-four segments, calling each segment a specific solar term. The criteria for its formulation were developed through the observation of changes of seasons, astronomy, and other natural phenomena. The element remains of particular importance to farmers for guiding their practices. Some rituals and festivities are associated with the terms, which have contributed to the community’s cultural identity. Knowledge of the element is transmitted through formal and informal means of education.

Cini are traditional handmade glazed tiles and ceramics made in Turkey with colourful motifs found on building facades and in homes. The designs represent local customs and beliefs. They are drilled on paper and transferred with hand-drawn contours, and then the work is dyed, glazed, and fired. Practiced formally and informally in traditional workshops, public education centres, universities, and homes, cini making is an outlet for self-expression, development, and healing and a symbolic aspect of Turkey’s cultural identity.

In cities and towns throughout Japan, float festivals are held annually to pray to the gods for peace and protection from natural disasters. The Yama, Hoko, and Yatai float festivals, considered the biggest events of the year, involve the collaborative efforts of various sections of the community and, as a traditional practice, reflect the diversity of local culture. Responsibilities are shared by everyone, from float construction to music and coordination with senior bearers teaching the young, and workshops are also held.

The philosophy behind the ancient Indian practice of yoga has influenced various aspects of how society in India functions, whether it be in relation to areas such as health and medicine or education and the arts. Based on unifying the mind with the body and soul to allow for greater mental, spiritual, and physical wellbeing, the values of yoga form a major part of the community’s ethos.