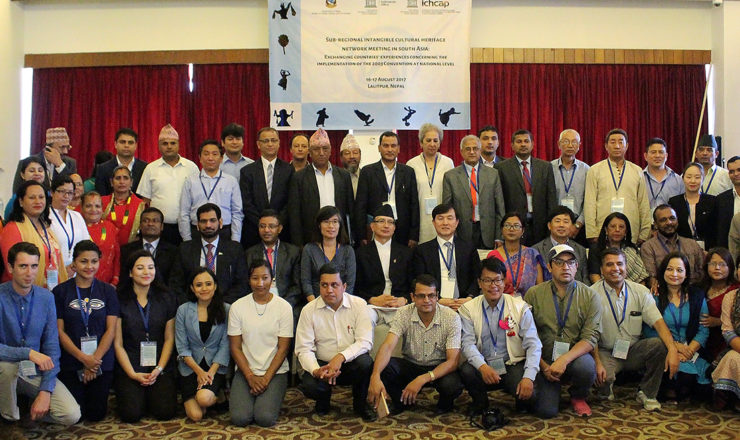 ICHCAP hosted the Sub-regional ICH Networking Meeting in South Asia from 16 to 17 August 2017, together with the UNESCO Office in Kathmandu, to provide the participants with a chance to share experiences concerning policies and countries’ processes for ICH safeguarding.

The meeting was aimed to allow various stakeholders in South Asia to discuss ICH safeguarding policies and share experiences in light of the implementation of the 2003 Convention for the Safeguarding of Intangible Cultural Heritage. South Asia, which is home to diverse ICH, is facing challenges in securing resources or trained experts for ICH safeguarding amidst rapid globalization and economic development. Against this backdrop, ICHCAP and the UNESCO Kathmandu Office organized the meeting to discuss ICH policies and build human networks in the field of ICH among relevant government officials and experts from seven South Asian countries including Bangladesh, Bhutan and India, which will ultimately help enhance regional collaboration.

The first day of the meeting, 16 August, was dedicated to country reports on ICH policies and systems in South Asia and a discussion on future actions. Before the country reports were presented, Duang Vich Han, Culture Specialist of the UNESCO Office in Bangkok, introduced the objectives of the 2003 Convention and relevant UNESCO projects. Then, government officials from the member states described their respective ICH policies and discussed issues and challenges about ICH safeguarding. Prof. Danister Perera, the moderator of the discussion, wrapped up the session with an explanation about the impact of ICH policies on ICH safeguarding and sustainable development. Lastly, a special session took place, where ICHCAP explained the current status of its collaborative projects in South Asia and encouraged the member countries to be actively involved in the projects and promote their networking.

The last day of the meeting opened with a session where the participants shared their experiences on ICH inventory making and nomination preparation, which was followed by another session where the participants established action plans for South-Asian ICH safeguarding. Through the sessions, the participants could understand challenges faced by each country in the execution of ICH policies. They also paid close attention to the presentation given by Jinjo Yang, a Korean expert from the National Intangible Heritage Center. He described the enactment of Act on the Safeguarding and Promotion of Intangible Cultural Heritage of Korea in line with the implementation of the Convention and the institutional protection of ICH. As the host of the Sub-regional ICH Networking Meeting in South Asia, ICHCAP will continue to expand its collaboration with the member states in South Asia and also engage in various collaborative projects for regional ICH safeguarding.