Nepali Women and the Teej Festival 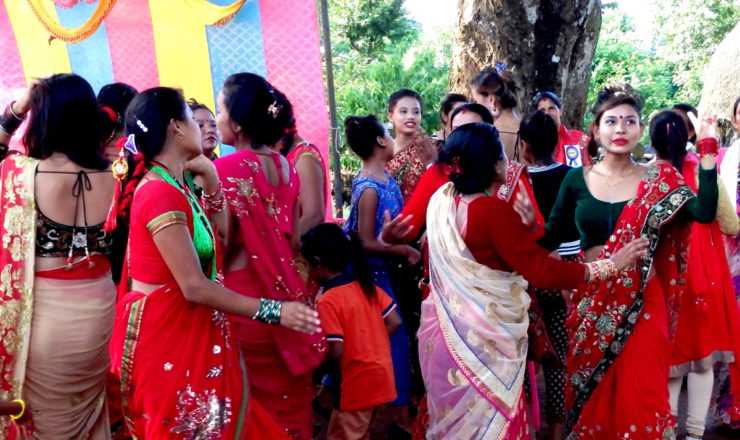 Hindu Nepali women celebrate a huge festival—one of the biggest occasions in Nepal—known as teej. It takes place on the third day of Shuklapaksha in Bhadra (normally in August or early September). The mythical explanation of teej purports that Hamalay’s daughter Goddess Parvati went through a rigorous fasting for 108 years known as hari talika teej with the desire to have Lord Shiva as her husband. Having witnessed the willingness of the Goddess to be with him, Lord Shiva accepted her as his wife. Goddess Parvati’s spirit, devotion, and strong intention generally compose the story upon which teej festival is grounded. Inevitably, Nepalese women have come to see teej as a venue for them to show their devotion to their significant other. If unmarried, they celebrate teej as a symbolic prayer to someday have a good husband.

In a highly male-dominated society such as that of Nepal, this kind of festival rings the idea of female subjugation and puts women empowerment in question. Does teej, a Nepali heritage as it is, survive a misogynistic culture? How do women (re)create themselves in a festival created by men for men? To put these inquires in context, it should be noted that Nepali women have historically been regarded as inferior objects. In the old days, if married, women would not be allowed to visit their hometown; they would not be given easy access to basic needs of living such as communication and transportation. teej is, again, a festival created by men symbolically for men, but it also is, and absolutely a venue for women. Nepali women use this opportunity to be with others to share their sorrow, happiness, and other deep emotions in togetherness. It has been reported that women use Teej as an assembly to collect funds for women-centered causes, taking advantage of the big occasion to raise development issues.

teej remains as an important festival in Nepal, a surviving cultural vein of the South Asian nation. It honors Nepalese folk life, folk songs, and ancient Nepali music. Wearing red attire with fancy ornaments, participating in singing, dancing, and eating dar (a particular food in Teej) are the main activities in the festival. These days, both women and men observe the festival, recognizing its cultural value